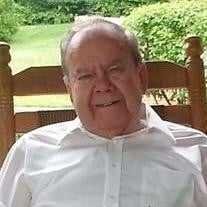 Ottis R. Slagle, 82, of New Castle, went home to be with the Lord on Sunday, January 11, 2015 at St. Vincent Hospice in Indianapolis. He was born May 13, 1932 in Monticello, Kentucky the oldest son of the late Robert Vincent and Edna Mae (Dobbs) Slagle and moved to Henry County with his family as a child. Ottis worked for Chrysler Corporation and retired in 1982 after 30 years of service. He also was self-employed his entire adult life with Ace Window Cleaning and Painting. During this time he subcontracted at Indiana University’s Assembly Hall in Bloomington. Ottis was a proud veteran and served his country in the United States Army during the Korean Conflict. Ottis was a founding member of the Civil Defense-Sheriff’s Division and for many years was the chair person with the American Red Cross in Henry County. Under his guidance and leadership, he was instrumental in expanding its influence in the area. While with the Red Cross, he was very active in their projects, especially the disaster relief program. Ottis served as Town Marshall in Spiceland during the 1980’s and was often counted on for his support to the law enforcement agencies in the surrounding communities. He was a Democratic candidate for Henry County Commissioner and was active in Democratic politics. He attended the inauguration of President Bill Clinton. Ottis was a member of the American Legion, Eagles Lodge, and was a former member of the Moose Lodge. He was also a lifetime member of GWRRA (Gold Wing Road Rider Association) and supported the “Harley’s with Hearts” fund raisers. He was a charter member of Memorial Baptist Church and a former member of Grand Avenue Baptist Church both of New Castle. Ottis enjoyed riding motorcycles, woodworking, nature and anything where he could be outdoors. He loved people and never said an unkind word of anybody. He always had a positive outlook on life no matter how dire the situation. Ottis was a man with a quick wit and a wonderful sense of humor. He loved good food and enjoyed eating and spending time with his family. He is survived by his former wife, Carolyn Slagle of New Castle; his three daughters and their husbands, Susan and Dennis Stamper of Cambridge City, Samantha and Jeff Meeks of Brunswick, Georgia, and Soni Cross of New Castle; his grandchildren, Cory Owens, Caylie (husband: Wes) Dicken, Cody (wife: Mandy) Stamper, Luke Meeks, Seth Cross and Nicholas Cross; his great-grandchildren, Merin and Lilly Owens, Izik and Van Stamper; Alaina and Norah Dicken and Kobe Cross; his sisters, Irene Bertram of Anderson and Ruth (husband: Hurlen) Huckeby of New Castle and his brother, Donald (wife: Saundra) Slagle of Colorado Springs, Colorado. Funeral services will be held at 1:00 p.m. Thursday, January 15, 2015 at Sproles Family Funeral Home with the Rev. Dr. Clark E. Hobby officiating. Burial will follow in South Mound Cemetery with military honors provided by a contingent from the U.S. Army, the American Legion and the V.F.W. Family will receive friends 4 – 8 p.m. Wednesday and an hour before services at the funeral Home. Memorial contributions may be offered to the American Legion and the Community Kids Fund through the Henry County Community Foundation. You may send the family a personal condolence at www.sprolesfamilycares.com. The Sproles family and staff are honored to serve the family of Ottis Slagle.

Ottis R. Slagle, 82, of New Castle, went home to be with the Lord on Sunday, January 11, 2015 at St. Vincent Hospice in Indianapolis. He was born May 13, 1932 in Monticello, Kentucky the oldest son of the late Robert Vincent and Edna Mae (Dobbs)... View Obituary & Service Information

The family of Ottis R. Slagle created this Life Tributes page to make it easy to share your memories.

Send flowers to the Slagle family.