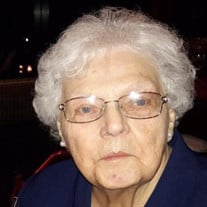 Patricia Lee (Ellis) Riggs, 88, of New Castle, passed away Saturday, December 29, 2018 at Miller’s Merry Manor in Middletown. She was born June 9, 1930 at home in Rush County, Indiana, a daughter of the late Edgar and Uva (VanDuyn) Ellis. Patricia was a homemaker, a farmer’s wife and a farmer, a mother, and a caregiver. She married the love of her life, Jean Riggs, on September 17, 1949 and together they enjoyed 50 years of marriage until his death on June 5, 2000. She was a member of Grace Baptist Church and the Kennard Brotherhood and Sisterhood. Those left to cherish Patricia’s memory include 10 children, Bill (Carol) Hess of Volo, IL, Rick (Cindy) Patton of Indianapolis, Chester (Carolyn) Riggs of Corinth, TX, Donna (Phillip) Zachary of Middletown, Arlene Riggs of The Villages, FL, Darlene Riggs of Daleville, Robert (Brenda) Riggs of Kennard, Missionary John (Marcia) Riggs of Ndola, Zambia, Africa, Sharon (Ken) Custer of New Castle, and David (Risa) Riggs of Lincoln, IL; a daughter-in-law, Debbie Riggs of New Castle; 19 grandchildren; 30 great-grandchildren, and several nieces and nephews. Patricia was preceded in death by her husband, Jean Riggs; son, Mark Riggs; granddaughter, Cindy Windmeyer; great-granddaughter, Hannah Bailey; sister, Doris Linder and four brothers, Jim, Max, Keith, and Rex Ellis. Funeral services will be held at 1:00 pm Wednesday, January 2, 2019 at Grace Baptist Church in New Castle with Pastor Denny Neal officiating. Burial will follow in Glen Cove Cemetery in Knightstown. Friends may call from 11:00 am until the time of service Wednesday at the church. You may send the family a personal condolence at www.sprolesfamilycares.com. Arrangements have been entrusted to the care of Sproles Family Funeral Home. The Sproles family and staff are honored to serve the family of Patricia Lee (Ellis) Riggs.

The family of Patricia Lee Riggs created this Life Tributes page to make it easy to share your memories.

Send flowers to the Riggs family.