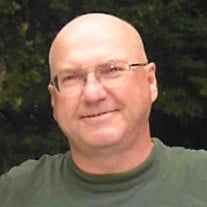 Patrick E. Marlow, 57, of Brownsburg, passed away unexpectedly at home with his wife by his side on October 7, 2016. He was born April 17, 1959 in New Castle, a son of Eldred and the late Willie Mae (Choate) Marlow. Patrick graduated from New Castle Chrysler High School in 1977. AZ2 Marlow served in the US Navy aboard the USS Constellation in VA-165 from 1978-1982. He worked for 20 years at Commercial Vinyl’s/Imperial in New Castle and was currently working in Indianapolis at Wellpointe/Blue Cross Blue Shield Insurance in the Customer Care Department. Patrick was an avid Chicago Bears football fan and loved fishing, golfing and bowling with his sons. He was also known for listening to Christmas music all year round. He is survived by his loving wife of 35 years, Donna Ellen (Gaw) Marlow; father, Eldred (wife: Delores) Marlow of New Castle; sons, Jason (wife: Angela) and Jonathan (fiancé: Harmoni Hall) Marlow; grandsons, Dane Patrick Marlow and Jaxon Steele Marlow; brother-in-law, Joseph (wife: Glenda) Gaw Jr.; sisters-in-law, Cheryl (husband: Joe) Floyd, Susan (husband: Scott Edwards) Gaw and several aunts, uncles, cousins, nieces and nephews. Along with his mother, he was preceded in death by his grandparents, Windel and Mildred Marlow and three of his brothers, Michael, Terry and Steven Marlow. Funeral services will be held at 1 p.m. on Saturday, October 15, 2016 at Sproles Family Funeral Home. Burial will follow at South Mound Cemetery West Lawn Edition with Military Honors provided by contingents from the U.S. Navy and the American Legion. The family will receive friends from 10 a.m. until the time of service on Saturday at the funeral home. You may send the family a personal condolence at www.sprolesfamilycares.com. Sproles family and staff is honored to serve the family of Patrick Marlow.

Patrick E. Marlow, 57, of Brownsburg, passed away unexpectedly at home with his wife by his side on October 7, 2016. He was born April 17, 1959 in New Castle, a son of Eldred and the late Willie Mae (Choate) Marlow. Patrick graduated from... View Obituary & Service Information

The family of Patrick Eldred Marlow created this Life Tributes page to make it easy to share your memories.

Send flowers to the Marlow family.