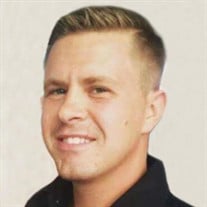 Paul Curtis Ealy, 28, of Indianapolis, died unexpectedly on Wednesday, November 16, 2016. He was born December 1, 1987 in Indianapolis, the son of Ricky Richardson and MaDonnava Ruth Ealy. Paul was a 2006 graduate of Southport High School and then served four years in the Marine Corps. Paul worked for ACE Paving in Westfield and in his down time he enjoyed working out and running. Those left to cherish Paul’s memory include his loving mother, Madonnava Ealy of Indianapolis; his grandfathers, Dewey Ealy of Manchester, KY and Curt Nantze of Indianapolis; aunts, Della Crawford of New Albany, IN, Carol (husband: Mike) Dorety, Jan Richardson, and Julie Richardson all of Sarasota, Florida; uncles, Danny (wife: Theresa) Ealy of Westfield and David (wife: Robin) Ealy of Corydon and many cousins. Paul was preceded in death by his father, Ricky Richardson; his paternal grandfather, Richard Arlis Richardson; his grandmothers, Leona Collins Nantze and Wilma Bolyard, and an infant sister, Carrie Jo White. Funeral services will be held at 2:00 pm Saturday, November 19, 2016 at Southside Church of the Nazarene 2515 E. Thompson Rd., Indianapolis, with Pastor Danny Ealy officiating. The family will receive friends from noon until 2:00 pm Saturday at Southside Church of the Nazarene. Services will also be held at 2:00 pm Monday, November 21, 2016 at Britton Funeral Home in Manchester, KY with calling two hours prior to the service at the funeral home. Burial will follow in Bart Collins Cemetery on Lost Fork in Manchester, Kentucky with military honors conducted by a contingent from the US Marines. Arrangements have been entrusted to the care of Sproles Family Funeral Home in New Castle. You may offer the family a personal condolence at www.sprolesfamilycares.com. The Sproles family and staff are honored to serve the family of Paul Curtis Ealy.

The family of Paul Curtis Ealy created this Life Tributes page to make it easy to share your memories.

Send flowers to the Ealy family.