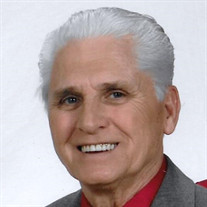 Paul B. Fox, of Candler, North Carolina, passed peacefully into the arms of the Lord in the late morning of Sunday, January 20, 2019 at the Aston Park Health Care Center in Asheville, North Carolina. He was 84. Mr. Fox was born September 30, 1934 in Estill County, Kentucky, a son of the late John W. and Cora Mae (Spivey) Fox. He attended school in Kentucky and like many others from that area, came to Indiana as a young man. He married Dessie Barker on September 20, 1952 in Liberty, Indiana and they spent most of their lives in the Wayne County area. He worked for McClelland Casket Co., D&M Manufacturing and retired along with his wife as manager of the Villa Motel in Richmond. After moving to the Asheville area, he worked another 13 years at the Biltmore Estate. Paul was an outdoorsman and enjoyed fishing and hunting, but his passion was Gospel Music. Paul was a founding member of the First Southern Quartet and after that, he sang with The Gospel Fishermen. He loved playing his guitar and singing with his family and friends. An accomplished songwriter, Paul had several of his compositions recorded by several gospel groups, most notably the Primitive Quartet. Paul loved being around people and loved sharing a good story. He will be remembered for his warm personality and friendly smile. Paul was a true Christian gentleman and loved the Lord with all his heart. He was a founding member of the Freedom Missionary Baptist Church in Richmond and after he and Dessie moved to North Carolina, they faithfully attended the Maple Ridge Baptist Church in Candler. Paul is survived by his wife of nearly 67 years, Dessie Hildred Fox; his sons and their wives, Pastor Steven and Kay Fox of Candler, North Carolina, Randy and Tammy Fox of Asheville, North Carolina and Matthew and Dianna Fox of Richmond, Indiana; his grandchildren and their spouses, Heather and Adam White, Jeremy Fox, Cessali Fox, Carson Fox and Noah Fox; his great-grandchildren, Tanner and Emma White; his sister, Hurley Berry as well as several nieces, nephews, cousins and a host of friends. In addition to his parents, he was preceded in passing by his brothers and sisters, Edward Fox, Everett Fox, Elbert J. Fox, Nevada Sue Ward, Ezart Fox, Ledford Frank Fox and Hubert Fox. Services for Mr. Paul B. Fox will be at 11:00 am, Thursday, January 24, 2019 at the Freedom Missionary Baptist Church, 794 Round Barn Road South, Richmond, Indiana with his sons, Pastor Steven Fox, Randy Fox and Matthew Fox officiating. Burial will follow to Salem Primitive Baptist Cemetery near Hagerstown. The family will receive friends from 5:00 until 8:00 pm Wednesday, January 23, 2019 at the church. Arrangements are entrusted to the care of Sproles Family Funeral Home in New Castle, Indiana. For those choosing to make a memorial contribution, the family has suggested they be offered to the St. Jude’s Children’s Research Hospital, www.stjude.org or Maple Ridge Baptist Church, PO Box 118, Chandler, NC 28715. You may send the family a personal condolence at www.sprolesfamilycares.com. The Sproles family and staff are honored to serve the family of Mr. Paul B. Fox.

Paul B. Fox, of Candler, North Carolina, passed peacefully into the arms of the Lord in the late morning of Sunday, January 20, 2019 at the Aston Park Health Care Center in Asheville, North Carolina. He was 84. Mr. Fox was born September 30,... View Obituary & Service Information

The family of Paul B. Fox created this Life Tributes page to make it easy to share your memories.

Paul B. Fox, of Candler, North Carolina, passed peacefully into...

Send flowers to the Fox family.