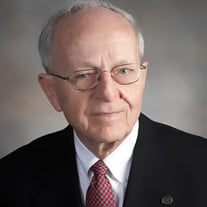 Paul William “P.W.” Prior Sr., 96, a New Castle resident, passed away Tuesday, January 2, 2018 at his home with his wife, Marian, by his side. Mr. Prior, long time President and Chairman of the Board of Henry County Savings and Loan and Ameriana Bank, was a decorated Navy combat pilot who served his country admirably in the Pacific Theater during World War II. Upon returning home, he began his long and distinguished banking career in Louisville, KY with Citizens Fidelity Bank and Trust. Before joining Henry County Savings and Loan, P.W. was Chief Executive Officer of Fidelity Federal Savings in Seymour, IN. While leading Henry County Savings and Loan, he was also active in banking on both the National and State levels having served as President of the United States League of Savings Institutions where he met frequently with President Ronald Reagan and Secretary of the Treasury, Donald Regan, as well as members of Congress. During his tenure, Mr. Prior visited nearly every state in the nation and addressed banking conferences in both Japan and Great Britain. On the state level, he served as President of the Savings and Loan League of Indiana and as a Director of the Federal Home Loan Bank of Indianapolis. P.W. was also active in numerous civic organizations including a Director of the Indiana State Chamber of Commerce, founding member of the New Castle/Henry County Economic Development Commission, a Director of the Henry County Hospital Foundation, a Director of the Board of Associated Colleges of Indiana, a Trustee for the First Presbyterian Church and a member of the New Castle Rotary Club. He was also instrumental in locating the Indiana Basketball Hall of Fame to New Castle. Mr. Prior was twice named a Sagamore of the Wabash (by Governors Orr and Bayh) and a Kentucky Colonel (by Governors Patton and Brown). He was also named Citizen of the Year both in New Castle and Seymour. Above all, Mr. Paul W. (P.W) Prior Sr. was the consummate gentleman. P.W. was born on June 10, 1921 in Huntingburg, IN, a son of the late John Edward and Goldie (Seay) Prior. He is survived by his wife, Marian; a daughter-in-law, Carolyn Prior; a brother-in-law, William "Tooter" Harlow and several nieces and nephews. Along with his parents, he was preceded in death by his two sons, Paul W. "Bill" Prior and Roger A. Prior. Graveside service will be held at 11:00 am on Wednesday, June 20, 2018 at South Mound Cemetery in Section 6 alongside the Prior Memory Garden. Memorial contributions may be made to the Henry County Community Foundation for the Prior Memory Garden. You may send the family a personal condolence at www.sprolesfamilycares.com The Sproles family and staff is honored to serve the family of Paul William Prior Sr.

Paul William &#8220;P.W.&#8221; Prior Sr., 96, a New Castle resident, passed away Tuesday, January 2, 2018 at his home with his wife, Marian, by his side. Mr. Prior, long time President and Chairman of the Board of Henry County Savings and... View Obituary & Service Information

The family of Paul William Prior Sr created this Life Tributes page to make it easy to share your memories.

Send flowers to the Prior family.