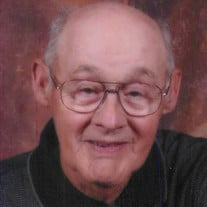 Paul Shelton, 90, of New Castle, went to be with the Lord, Monday, November 17, 2014 at Glen Oaks Health Campus surrounded by his family. He was born December 13, 1923, in Greeneville, Tennessee, a son of the late Luther and Margaret Shelton. Paul married the love of his life, Carrie Jones Shelton, January 26, 1946, she preceded him in death on September 12, 2013. Paul retired from Ingersol Steel in May, 1982 after 34 years of service. He was a crane operator for many years and was said to be the best Ingersol ever had. Paul also drove for Yellow Cab Taxi service in the 50’s and 60’s. He was a veteran of World War II, serving in the European Theater. Paul loved his family and his three cats, Sam, Lucky and Boots. He enjoyed fishing and hunting for Ginseng. He attended Foursquare Church and was water baptized at the age of 87. He is survived by a daughter, Geraldine (husband: Steve) Brown of New Castle; two granddaughters, Brandy (Mario) Agresta of Indianapolis and Carrie (Josh) Smith of New Castle; a grandson, Aaron Brown of New Castle; four great-grandchildren, Dante Agresta, Isabella Agresta, Ben Smith and Bailey Smith; a sister, Arizona Ramsey of Appomattox, Virginia and many nieces and nephews. In addition to his parents and wife, he was preceded in death by a daughter, Linda Jean Shelton; seven sisters and eight brothers. Funeral services will be held at 1:00 p.m. Wednesday, November 19, 2014 at Sproles Family Funeral Home with Pastor Jim Becker officiating. Burial will follow at South Mound Cemetery West Lawn Addition with military honors provided by contingents from the U.S. Army, V.F.W. and American Legion. The family will receive friends from 11:00 a.m. – 1:00 p.m. on Wednesday. You may send the family a personal condolence at www.sprolesfamilycares.com. The Sproles family and staff are honored to serve the family of Paul Shelton.

Paul Shelton, 90, of New Castle, went to be with the Lord, Monday, November 17, 2014 at Glen Oaks Health Campus surrounded by his family. He was born December 13, 1923, in Greeneville, Tennessee, a son of the late Luther and Margaret Shelton. Paul... View Obituary & Service Information

The family of Paul Shelton created this Life Tributes page to make it easy to share your memories.

Send flowers to the Shelton family.