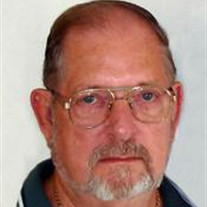 Paul R. York, 78, of Largo, Florida and formerly of New Castle, died Sunday, February 26, 2012 following a brief illness at WellStar Tranquility Hospice in Austell, Georgia. He was born February 23, 1934 in Albany, Kentucky, a son of the... View Obituary & Service Information

The family of Paul R. York created this Life Tributes page to make it easy to share your memories.

Send flowers to the York family.