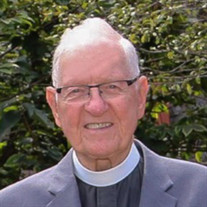 The Rev. Dr. Clark E. Hobby, 87, entered the Church Triumphant April 21, 2017, at Ball Memorial Hospital following a week stay under the expert and compassionate care of the physicians and nurses. Born in McKeesport, PA, Pastor Hobby was an orphan, having lost both parents by age six. In 1936, he entered the Milton Hershey School (orphanage) founded by the chocolate magnate, Milton S. Hershey; the school became “home” for the next eleven years. After graduation from the Hershey School, he entered the United States Air Force. While stationed at Chanute Air Force Base, Rantoul, Illinois, he met and married Betty Keith, the organist at the nearby Lutheran church. After completing correspondence work through Candler Theological Seminary/Emory University at age twenty-six, his discernment led him to the “Calling” to become an ordained minister. With a wife, three children, and no funds for education, he enrolled at the University of Illinois. By God’s grace and blessed with a devoted spouse, he completed his Bachelor of Science degree in three and a half years, while working forty hours a week to support the family. Later, he completed a Master of Divinity from Christian Theological Seminary, Indianapolis, and did graduate work at the Lutheran School of Theology, Chicago. He earned his Doctor of Ministry degree at United Theological Seminary in 1979. Enthusiastic about shepherding God’s people, Pastor Hobby served the following congregations in a full-time capacity: Chapel Hill United Methodist, Indianapolis, IN, from 1962-66; Peace Lutheran, Connersville, IN, from 1966-70; Grace Lutheran, Columbia City, IN, from 1970-77; Holy Trinity Lutheran, New Castle, IN, from 1977-83 and again from 1993-2000; and St. Mark Lutheran, Auburn, IN, from 1983-93. Several of the congregations he served bestowed on him emeritus status. In his retirement, Pastor Hobby assisted numerous congregations, including a lengthy tenure as interim pastor with Germantown Lutheran Church, Pershing, IN. In the larger church he served on a number of committees, including chairing the Lutheran “team,” which for a number of years was involved in dialogue with the Methodist’s “team” in the state of Indiana. He also served as Regional Coordinator for the introduction of the hymnal, Lutheran Book of Worship. He was a Director on the Board at Wittenberg University for over 30 years. He also served on various community boards, including being President of the Ministerial Association (ecumenical) in each of the communities he served as pastor; the DeKalb - Tri -County Mental Health Board; and the Henry County Counseling Center Board. He also volunteered as hospital chaplain in two different communities. Following his full-time work in the church, Pastor Hobby turned his focus to another passion: writing. In addition to a number of small articles, he wrote and published four books: The Homeboy (2000), Seasons of Blessing (2003), The Shepherdess (2005), and From the Pastor’s Desk (2015). Pastor Hobby received numerous honors and citations during his career. Among them, he was selected as the 1972 Alumnus of the Year at the Milton Hershey School in Hershey, Pa.; he was given honorary membership in the Wittenberg University Alumni Association in 1992; and, in 1999, Wittenberg University conferred on him an honorary Doctor of Divinity at its commencement. Survivors include a sister: Audrey (Richard) Trent of Wilmington, DE; four children and their spouses: Janet (James) Perry of Connersville; Ronald (Renee) Hobby of Noblesville; Linda (Roger) Huntley of New Castle; Robert (Jennifer) Hobby of Fort Wayne; ten grandchildren: Steven Hobby of LaPorte; Jennifer (Jeff) Giesting of Fishers; James Hobby of Indianapolis; Christopher Huntley of New Castle; Curtis (Ashley) Huntley of New Castle; Amy (Glenn) Arndt of Connersville; Kevin (Michelle) Perry of Connersville; Hannah, Lydia, and Elizabeth Hobby of Fort Wayne; two stepgrandsons: Chad (Anne) Salyer of Fishers; and Brad (Angi) Salyer of Noblesville; fifteen great grandchildren: Regan and Mitchell Giesting of Fishers; Caroline and Adam Arndt of Connersville; Haylee, Alivia, Myleigh, and Willow Perry of Connersville; Montana and Emma Hobby of LaPorte; Jordan Huntley, stationed in Las Vegas; Bryce and Rylan Huntley of New Castle; Dakota and Isabella Huntley of New Castle; and one four-legged companion, Angel. He was preceded in death by his parents Andrew and Frances Hobby; by six siblings; and by his beloved wife of 54 years, Betty. Calling will take place on Saturday, April 29th at Sproles Family Funeral Home, 2400 S. Memorial Dr., New Castle, IN, from 3:00-7:00 p.m. and on Sunday, April 30th at First Christian Church, 2000 Bundy Ave., New Castle, IN, from 3:30-4:30 p.m. A Festival Service of Eternal Life will be Sunday at 5:00 p.m. at First Christian Church. The Rev. Dr. William Gafkjen, Bishop of the Indiana Kentucky Synod of the ELCA will preach. The service will be preceded by special choral and instrumental pre-service music at 4:30 p.m., directed by Pastor Hobby’s son, Robert. A brief prayer service will be Monday, May 1, at 9:00 a.m. at Holy Trinity Lutheran Church, 535 S 14th St., New Castle, IN with burial following at South Mound Cemetery West Lawn Addition where Military Honors will be conducted by contingents from the U.S. Air Force and the Henry County Honor Guard. In lieu of flowers, the family is requesting memorial gifts in Pastor Hobby’s name be directed to Wittenberg University to be used for scholarships for pre-seminary students. Donations may be directed to Wittenberg University Office of Advancement, PO Box 720, Springfield, OH 45501, with envelopes available at the funeral home. You may send the family a personal condolence at www.sprolesfamilycares.com. The Sproles family and staff are honored to serve the family of The Rev. Dr. Clark E. Hobby.

The Rev. Dr. Clark E. Hobby, 87, entered the Church Triumphant April 21, 2017, at Ball Memorial Hospital following a week stay under the expert and compassionate care of the physicians and nurses. Born in McKeesport, PA, Pastor Hobby was an... View Obituary & Service Information

The family of The Rev. Dr. Clark E. Hobby created this Life Tributes page to make it easy to share your memories.

Send flowers to the Hobby family.