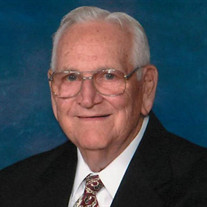 Rev. Max R. Mitchell, 89, of Carthage, died peacefully at 11:15 am, Friday, August 26, 2016 at Fairway Village in Indianapolis. He was born on April 29, 1927 in his home in Red’s Corner near Boggstown, Indiana. Max married the love of his life, Joann Barnhill, on December 29, 1945 at the Vine Street Methodist Parsonage in Shelbyville. He served his country in the U.S. Army in Korea from 1952 - 1954. Max was saved at the Franklin Church of the Nazarene in 1964, pursued his call to preach and was ordained in the Church of the Nazarene. He pastored churches on the Iowa and Indianapolis Districts. Max joined the International Conservative Holiness Association in 1987 and pastored churches in that association until his retirement. He was a home missionary and always farmed as well, owning several farms in various locations over the years. In his last years, he lived in Carthage and attended the Early Methodist Church. Max recently lived with his son, Rollin, in Plainfield and attended the Calvary Bible Wesleyan Church until his health no longer permitted. Those left to cherish his memory include his children, Darrell Mitchell of Liberty, Rev. Rollin (wife: Debra) Mitchell of Plainfield and Julia (husband: Rev. David) Garrett of Corydon; nine grandchildren, 12 great-grandchildren, three step-grandchildren and one step-great-grandchild; a brother, Howard (wife: Kathryn) Mitchell of Marietta and a sister, Helen Mays of Shelbyville. He was preceded in death by his parents, Ben and Ethel Mitchell; his wife of 66 years, Joann Mitchell in 2012; brothers, Adrian, Royden and Glen Mitchell and sisters, Inez Weaver, Mary Hill, and Thelma Bullock. Funeral services will be held at 11:00 a.m. Wednesday, August 31, 2016 at the Franklin Church of the Nazarene, 140 Branigin Road, Franklin, with the Reverends. Joe Smith, Norman Palmer, Buddy Perry and David Garrett officiating. Burial will follow in Second Mt. Pleasant Cemetery on Sugar Creek between Franklin and Shelbyville with military honors. The family will receive friends from 4 - 8 p.m. Tuesday at the church and one hour prior to the service Wednesday. Arrangements have been entrusted to the care of Sproles Family Funeral Home in New Castle. You may send the family a personal condolence at www.sprolesfamilycares.com. The Sproles family and staff are honored to serve the family of Rev. Max R. Mitchell.

The family of Rev. Max R. Mitchell created this Life Tributes page to make it easy to share your memories.

Send flowers to the Mitchell family.