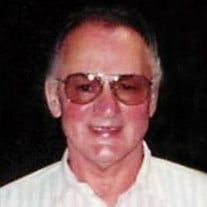 Richard L. Ballard Sr., 77, of Indianapolis, died Friday, May 23, 2014 at Golden LivingCenter - Brandywine in Greenfield following a lengthy illness. He was born September 30, 1936 in Indianapolis, a son of the late Louis and Dorothy (Hensley)... View Obituary & Service Information

The family of Richard L. Ballard Sr. created this Life Tributes page to make it easy to share your memories.

Send flowers to the Ballard family.