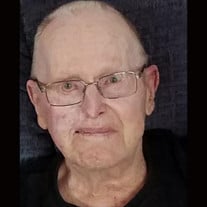 Richard Morton Ice, 98, of Mt. Summit passed away peacefully on the evening of Monday, September 13, 2021 at Glen Oaks Health Campus in New Castle. He was born on May 12, 1923 in Mt. Summit, a son of the late Trammel and Catherine Ice. Richard grew up on the family farm in Mt. Summit which was founded by the Ice family dating back to the 1850’s. He graduated from Muncie Central High School in 1941. Richard attended Purdue University in 1941 before being drafted in to the United States Army in 1942. He served his country from 1942 – 1946 during WWII and was stationed in England, France and Germany. Richard met his wife, Joan Matthews, in the town of Axminster, Devon, England and they were later engaged on April 20, 1946 and married November 12, 1946 in Gettysburg, PA after the war. Richard finished his studies in Agriculture at Purdue University in 1947 before moving back to their family farm in Mt. Summit. The Ice family raised dairy cows and at one time had the largest registered Jersey Dairy herd in the state of Indiana. Richard farmed until 1969 before selling the herd. He later worked for the Indiana State Department of Health as a Meat Inspector before retiring in 1983. He enjoyed travelling to Europe, Haiti, Ecuador, and spending time at the family cottage on Walloon Lake in Michigan. He water skied until his 80s and jet skied at age 94. Most of all Richard was very kind, giving, loving, and a gentle man. Those left to cherish his memory include is loving wife of 75 years, Joan Ice; children, Joe (Betty) Ice and Jill (David) Cook; son-in-law, Charles (Peg) Bell; grandchildren, Angela (Aaron) Miller, Matt (Danielle) Bell, Kelsea (Dean) Behrendsen, Jordan (Alexis) Ice and Christopher Cook; great-grandchildren, Rylee, Kolby, Marc, Christian, Collin, Lola, Mira and several nieces and nephews. In addition to his parents, he was preceded in death by a daughter, Jennifer Lou Bell and a sister, Barbara Ice Smith. In lieu of flowers memorial contributions may be made to the American Red Cross, St. Jude Children’s Research Hospital or the Salvation Army. Celebration of life gathering will be held from 2 - 5 pm, Sunday, October 3, 2021 at the Mt. Summit Community Building. A private burial will be held with the family at Mt. Summit Cemetery with military honors conducted by contingents from the U.S. Army and the American Legion. You may send the family personal condolences at www.sprolesfamilycares.com. The Sproles family and staff are honored to serve the family of Richard Ice.

Richard Morton Ice, 98, of Mt. Summit passed away peacefully on the evening of Monday, September 13, 2021 at Glen Oaks Health Campus in New Castle. He was born on May 12, 1923 in Mt. Summit, a son of the late Trammel and Catherine Ice. Richard... View Obituary & Service Information

The family of Richard Morton Ice created this Life Tributes page to make it easy to share your memories.

Send flowers to the Ice family.