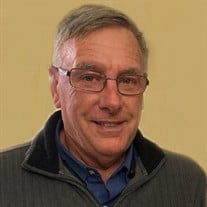 Richard “Jay” French, 73, of New Castle passed away peacefully on the evening of Saturday, June 18, 2022 at home surrounded by his family. He was born on July 12, 1948 in New Castle, IN, a son of the late David and Mary Jane French. Jay graduated from Union High School in 1966. Jay served his country in the United States Army as a Military Policeman during the Vietnam War. He worked as a Lab Technician for Chrysler Corporation and retired in 2003 after 37 years. Jay also worked for Miller Environmental and General Truck Sales in Muncie for several years. He enjoyed going on cruises, farming, mowing, fishing, boating and being outdoors. Those left to cherish his memory include his wife, Anna “June” French; children, David (Kristen) French, Julie (Shane) Delon, Steven (Jody) French, Mark (Danielle) French, Keisa (Alan) Messer and Sarah Clifford; 12 grandchildren; two great-grandchildren; siblings, Dale (Joyce) French, Ben (Pat) French, Linda (Richard) Ratcliff, Connie (Ed) Smith; step-mother, Yvonne French, and several nieces and nephews. Jay was preceded in death by his parents, David Franklin and Mary Jane (Razor) French. In lieu of flowers, memorial contributions may be made to Henry County Community Foundation for the Cancer Society Fund. A celebration of life will be held at 1:00 pm, Saturday, June 25, 2022 at Sproles Family Funeral Home in New Castle with Ben French officiating. Friends may visit from 10 am – 1 pm prior to the service at the funeral home. You may send the family a personal condolence at www.sprolesfamilycares.com. The Sproles family and staff are honored to serve the family of Jay French.

The family of Richard Jay French created this Life Tributes page to make it easy to share your memories.

Send flowers to the French family.