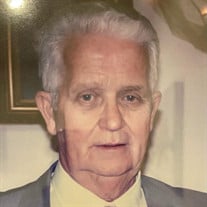 Mr. Robert Eugene “Bob” Goad, Montgomery, Texas, and formerly of Yorktown, Indiana, ran into the arms of Jesus on the late morning of Monday, August 16, 2021. He was 87. Bob was born January 11, 1934, in Honey Creek, Tennessee, one of four sons born to Chester and Flossie (Voiles) Goad. Bob attended schools in Tennessee where he met and married the love of his life and partner in the singing ministry, Ruby Jo Voiles. In 1967, Bob and Jo moved their young family to Cowan, Indiana to find employment just as countless others had done from that area. He soon found work at the Marhoefer Meat Packing Company and was employed there until the plant’s closing in 1980. He then was employed with Indiana Steel & Wire until his retirement in 1990 while living in Yorktown, Indiana. Bob’s life revolved around the church and his service to the Lord Jesus Christ. Bob dearly loved to sing and along with his family, traveled and sang in countless churches and in hundreds of revival meetings across Tennessee, Kentucky, Ohio, and Indiana. At one point in Bob’s life, in 1971, he endured a very serious and life-threatening health scare, and following his recovery, it gave him a greater zeal to serve the Lord, sharing His message in song at any and every opportunity. Bob had been a member at Eastside Baptist Church, Southern United Baptist Church, Poplar Run United Baptist Church as well as Westside United Baptist Church, serving each of these churches as a Deacon and song leader. Bob is survived by his loving wife, Ruby Jo (Voiles) Goad; his children, Paula (Bruce) Thornburg and Lanny (Robin) Goad; his grandchildren, Angie (Brad) Smith, Jen Thornburg, Mindy Fawley, and Lindsey (Paul) Hamilton; his great-grandchildren, Dustin Thornburg, Lexi Vlaskamp, Briella Hamilton and Braxton Hamilton; his brothers, James I. (Sandy) Goad and Charles L. (Mabel) Goad and his sister-in-law, Gladys Goad. In addition to his parents, Bob is preceded in passing by his step-father, Wilson Voiles; his brother, William J. Goad and his granddaughter’s husband, Brad Fawley. Funeral services will be conducted at 3:00 pm, Sunday, August 22, 2021, at the Westside United Baptist Church, 3021 West Cornbread Road, Muncie, with Pastor Larry Waters and Pastor Andy Phipps, Jr. officiating. Burial will follow at Jones Cemetery, north of Yorktown. The family will receive friends from 1:00 until the time of service Sunday at the church. Arrangements have been entrusted to the care of Sproles Family Funeral Home. You may offer the family a personal condolence at www.sprolesfamilycares.com. The Sproles family and staff are honored to care for the family of Brother Bob Goad.

The family of Robert E. Goad created this Life Tributes page to make it easy to share your memories.

Send flowers to the Goad family.