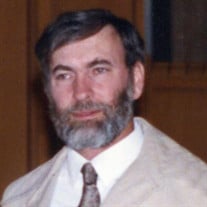 Roger Ruskin Dyer, 75, of Indianapolis, passed away on Thursday, February 4, 2021, at Richard L. Roudebush VA Medical Center in Indianapolis. He was born May 13, 1945, in Hammond, Indiana, a son of the late Wesley Elwood and Rachel Louise (Larrick) Dyer. Roger attended Castle Heights Military Academy in Lebanon, Tennessee, where he played trumpet in the band. He was a 1964 graduate of Shortridge High School in Indianapolis. His parents owned many airplanes so Roger grew up with the love of flying. Roger joined the Air Force right after high school and was stationed in Madrid, Spain and Frankfort, Germany. He loved working with wood and crafted custom kitchen cabinets. For many years, Roger owned RV Vans, a custom van shop, at 16th and Kessler in Indianapolis. After closing the van shop, he drove a semi for many years, until becoming paralyzed in 2006 in an airplane accident. Roger had an adventurous spirit and a vivid imagination. He loved his two dogs, Buster, an American-German Shepherd, and Levi, a Huskie mix. He is survived by a son, Tom (Michelle) Dyer of Greensboro; five step-grandchildren, Clayton and Caleb Roots, Isaiah and Clementina Mitchell, and Sarah Pate; a brother, Gordon (Jan) Dyer of Gallatin, TN and a sister, Barbara; several nieces and nephews and his long-time companion, Sharon Hamilton. In addition to his parents, Roger was preceded in death by a sister, Judy Dyer, who died at age eight and a brother, Ralph Dyer at age 11. Funeral services will be held at 2:00 pm Thursday, February 11, 2021 at Sproles Family Funeral Home with Pastor Jim Becker officiating. Friends may call from 12:00 pm until the time of the funeral, Thursday, at the funeral home. Graveside services will be held at 2:00 pm CST, Friday, February 12, 2021 at Evergreen Memorial Cemetery in Bloomington, Illinois with military honors. You may offer the family a personal condolence at www.sprolesfamilycares.com. The Sproles family and staff are honored to serve the family of Roger Ruskin Dyer.

Roger Ruskin Dyer, 75, of Indianapolis, passed away on Thursday, February 4, 2021, at Richard L. Roudebush VA Medical Center in Indianapolis. He was born May 13, 1945, in Hammond, Indiana, a son of the late Wesley Elwood and Rachel Louise... View Obituary & Service Information

The family of Roger Ruskin Dyer created this Life Tributes page to make it easy to share your memories.

Roger Ruskin Dyer, 75, of Indianapolis, passed away on Thursday,...

Send flowers to the Dyer family.