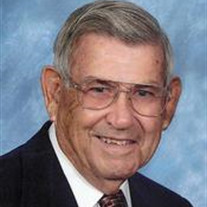 Rollin A. York, 94, of New Castle, went home to be with the Lord on Thursday, July 5, 2012 at Glen Oaks Health Campus in New Castle. He was born June 18, 1918 in Albany, Kentucky, a son of the late William Aaron and Daisy (Guffey) York. Rollin graduated from Albany High School in 1936 and from Great Commission Bible College in Anderson in 1954. He married the love of his life, Juanita R. (Jarrett) York, on May 29, 1943 and they made their home in New Castle until he entered Bible College. In 1955 they moved to Peru, South America to begin their missionary service. They lived in Lima where He studied Spanish until moving to the Jungle town of Pucallpa where they built a church and served most of their ministry. A favorite part of their ministry was to travel by dugout canoe to the Shibibo Indian Villages where they would minister. After returning from the mission field, Rollin worked for Foust Lumber before opening York Appliance Center which they owned and operated for many years. During their business years they travelled to Spain, Mexico, Canada and several of the Caribbean islands. Upon retirement they visited all the continental states and for many years spent winters in their RV in Tucson, AZ, Palm Springs, CA, Ft. Pierce, FL, McAllen, TX, Hilton Head, SC and Gulf Shores, AL. He enjoyed playing pool and shuffleboard and often entered tournaments with other retirees. Since 1947 he had been a member of Memorial Wesleyan Church, formerly Ninth Street Wesleyan where he served as Superintendent, Sunday School Teacher, Youth Leader and Assistant Pastor. He also helped start the Spanish ministry there and taught the Spanish Sunday School class for many years. He loved to sing and in the earlier years would often sing with his wife in church. He was member of the Best Years Fellowship Class and had been a member of the Breakfast Optimist Club. Most importantly, Rollin was the best husband, father and grandfather a family could ask for setting an excellent example to others of how the Word of God should be lived out. He is survived by his wife of 69 years, Juanita R. York; a son, Larry (wife: Patricia) York of Spencer; a daughter, Barbara (husband: John) Durbin of Yorktown; seven grandchildren, Todd (wife: Cheryl) York and Corey (wife: Amanda) York both of Spencer, Ryan (wife: Lisa) Hart of Houston, TX, Steven Blackburn of Florida, Alan Blackburn of Indianapolis, Daniel (wife: Nanette) Blackburn of Westfield and Beth (husband: Bo) Jones of Spencer; 14 great-grandchildren; 4 great-great-grandsons; his mother-in-law, Cloie Jarrett of Greensboro, and many nieces and nephews. He was preceded in death by a grandson, Rick Alan York; six brothers, Floyd, Julian, Truman, Clifford, Wilbur and Forest York; seven sisters, Ovadeen York, Delta Bureece, Edra Atkinson, Weltha Fairchild, Alma Gudger, Leva Dobbs and Beatrice Davis. Funeral services will be held at 11:00 a.m. Monday, July 9, 2012 at Memorial Wesleyan Church with Pastor Paul Kirk officiating and music provided by Todd York, grandson. Burial will follow in South Mound Cemetery West Lawn Addition. Friends may call from 2 – 6 p.m. Sunday at Sproles Family Funeral Home and one hour prior to the funeral at the church. Memorial Contributions may be made to the Alzheimer’s Association, www.alz.org. You may send the family a personal condolence at www.sprolesfamilycares.com. Sproles Family Funeral Home is honored to serve the family of Rollin York.

Rollin A. York, 94, of New Castle, went home to be with the Lord on Thursday, July 5, 2012 at Glen Oaks Health Campus in New Castle. He was born June 18, 1918 in Albany, Kentucky, a son of the late William Aaron and Daisy (Guffey) York.... View Obituary & Service Information

The family of Rollin A. York created this Life Tributes page to make it easy to share your memories.

Send flowers to the York family.