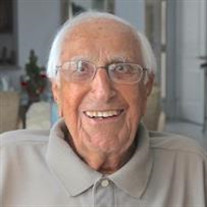 Ronald M. Peters, Sr., of Ft. Myers Beach, Florida, and Muncie, Indiana, passed away peacefully in his sleep at the age of 101 on August 12, 2015. He was formerly Vice-president of Steel Operations for General Cable Corporation in charge of Indiana Steel and Wire, and Indiana Pressed Steel from where he retired in 1979. He was also a director of Indiana Pressed Steel and Riva S.P.A. Italy, a subsidiary of General Cable. Ron was born on March 1, 1914 in Elizabeth, New Jersey. He grew up in Martinsville, New Jersey and graduated from Bound Brook High School. After attending Rutgers University for two years, he took a job in Lawrence, Massachusetts as a time and motion man for American Woolen Company. He moved to Worcester, Massachusetts in 1937 where he became a production line supervisor for American Steel and Wire Company. In Worcester he met the love of his life, Helene Loughlin. They married in 1941 and their daughter Karen was born in 1942. In 1945 Ron assumed a position as a consultant for Booz, Allen, and Hamilton. Ron, Helene, and Karen moved to Chicago, from where Ron was deployed on consulting contracts in the Midwest. In 1946 he was sent to Muncie, Indiana as a consultant to Indiana Steel and Wire Company, where he was soon hired by the company on a permanent basis. This launched his lengthy career at IS&W where he served as Chief Industrial Engineer, plant manager, general manager, and finally Vice-president of Operations. Their son Ron Jr. was born in 1947. The family lived in two locations on Calvert Street where the children attended Burris Laboratory School. Ron and Helene were both active in civic affairs. Ron served on the boards of United Way, American Red Cross, Boys Club of America, and the Muncie Rotary Club. He was an honorary member and past-president of Delaware Country Club. He was the chairman of the building committee for the major expansion of the club house in 1962. Later he oversaw the building of the new pro shop and the reconfiguration of the course. In their retirement Ron and Helene traveled extensively. They spent winter months in Ft. Myers Beach, Florida. Ron’s life long love of golf was rewarded in his 80s with four club championships in his age division. He shot his age in the last year in which he played, a 94. After Helene’s death in 1995, Ron devoted himself to his children, grandchildren, and great-grandchildren. He welcomed family members and friends to his winter home in Ft. Myers Beach, traveled extensively with the family, and tended Windmill Park, his acreage in Elliott Acres. The family will always cherish our trip to Italy in 2007 where he was able to visit the birthplace of his father. We will also cherish many other memories. His story telling and wry sense of humor will remain with us. He retained his razor sharp mind and keen wit right to the end. Even as he faded, he had us all in stitches. Ron was preceded in death by his wife of 54 years, Helene, his father and mother John and Rose Vancora Mastapeter, his brothers Ted Peters and George Mastapeter, and his grandson Curtis Marcum. He is survived by his children Karen Marcum and Ron Jr (Glenda); grandchildren Brad Sry (Danielle), Kelly Day (Jay), John Peters (Jonathan Rucks), Julie McKowen (Taron); great grandchildren Ann Dee Sry, Dalton Sry, Jayda Day, David Esses and Wilson McKowen; niece Cameron Peters, nephew Craig Mastapeter (Mary); brother-in-law Peter Loughlin (Valerie), and sister-in-law Anne Loughlin. Friends may call at Ron’s home, 513 S. Elliott Acres Drive, on Monday, August 17, 2015 from 4:00 p.m. to 7:00 p.m. Memorials may be made to IU Health Ball Memorial Hospice, 2401 W. University Ave., Muncie, Indiana 47303-3499, or to the charity of choice. Arrangements have been entrusted to the care of Sproles Family Funeral Home. The Sproles family and staff are honored to serve the family of Ronald M. Peters Sr.

Ronald M. Peters, Sr., of Ft. Myers Beach, Florida, and Muncie, Indiana, passed away peacefully in his sleep at the age of 101 on August 12, 2015. He was formerly Vice-president of Steel Operations for General Cable Corporation in charge of... View Obituary & Service Information

The family of Ronald M. Peters Sr. created this Life Tributes page to make it easy to share your memories.

Send flowers to the Peters family.