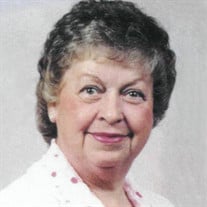 Rose “Rosie” Marie Fowler, 81, of New Castle, died peacefully Tuesday, May 23, 2017 at her home with her family surrounding her. Rosie was born March 18, 1936 in Mooreland, IN. Rosie was a 1954 graduate of Union High School. Rosie and Bill Fowler were married on September 26, 1954 and lived in the Cambridge City area and were married for 46 years before Bill passed away in 2001. Rosie was raised a farm girl and carried on the farming tradition when they purchased their own farm. They also owned the Cambridge City Farm Store. Rosie was a realtor for 37 years and retired from ERA Integrity Realty. Rosie held many positions with the Henry County Board of Realtors and earned Realtor of the Year in 1985 and 1993. Rosie was an active member of the Church of Jesus Christ of Latter-Day Saints. Rosie has spent her life serving, caring and loving others. Rosie is survived by her three children, Sharon (Randy) Penrod, Claudia (Brent) Edington and James (Lisa) Fowler. Rosie is also survived by her ten grandchildren, Kelli (Bob) Clark, Jami (Garrett) Owens, Ryan (Jill) Penrod, Jeff Harter, Brandi (Levy) Wash, Janelle (Thomas) Temple, Ashley (Larry) Gambler, Tanner Penrod, Christina (Gayland) Richardson, and Jason (Kattie) Fowler and several great-grandchildren. She is also survived by her brother, Larry (Brenda) Marshall. Rosie was proceeded in death by her husband, Bill; parents, Claude and Helen Marshall and two infant brothers. In lieu of flowers, memorial contributions may be sent to the American Cancer Society or the National Multiple Sclerosis Society. Funeral services for Rosie will be held at 11:00 am Saturday, May 27, 2017 at Sproles Family Funeral Home with Melvin R. Campbell Jr. officiating. Burial will follow in Mooreland Cemetery. Family will receive friends from 3 – 8 pm on Friday and one hour prior to the service at the funeral home. You may send the family a personal condolence at www.sprolesfamilycares.com. The Sproles family and staff are honored to serve the family of Rose Marie Fowler.

The family of Rose "Rosie" Marie Fowler created this Life Tributes page to make it easy to share your memories.

Send flowers to the Fowler family.