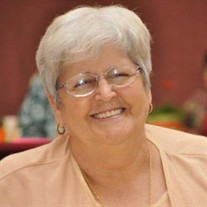 Ruby Estelle (Givens) Hudson, 75, of Gastonia, North Carolina, went home to be with the Lord on the evening of Tuesday, March 28, 2017 at Reid Hospital in Richmond, Indiana. She was born June 21, 1941 in Gastonia, North Carolina, a daughter of the late Ernest Alfred “E.A.” and Clara Ophelia (Fletcher) Givens. Ruby was a 1960 graduate of Ashley High School in Gastonia and earned a Bachelor of Science Degree in Education from Gardner-Webb University in Boiling Springs, North Carolina. She taught elementary and middle school for 10 years in the North Carolina Public School system. In 1980, she followed a call God placed upon her heart to Hephzibah Children’s Home for at-risk children in Macon, GA. She lovingly and faithfully served there for 25 years until her retirement in 2005. Ruby was a long-time champion of at-risk children and youth. She was firm when she had to be and yet always witty and humorous. Ruby was blessed with the gift of hospitality. She was an avid reader, enjoyed crossword puzzles, loved history and decorating for special events. She was a die-hard sports fan and especially loved the Atlanta Braves. Those left to cherish her memory include her two loving daughters, Lynn Hudson of Anderson and Susan (husband: Steve) Bray of Richmond; three granddaughters, Kayleigh (husband: Ryan) Kivett and Madison and Taylor Bray; four brothers, James Givens, Charles (wife: Jamie) Givens, Kenneth Givens, and Robert (wife: Debbie) Givens along with several nieces and nephews. In addition to her parents, she was preceded in death by her husband, Glenn E. Hudson. A Celebration of Ruby’s Life will be held at 2:00 pm Sunday, April 2, 2017 at the Firestone Wesleyan Church, 1700 Union Rd. Gastonia, NC, with Rev. Joe Neyman officiating. The family will receive friends from 1:00 pm until the time of the service Sunday at the church. Per Ruby's request, please wear casual attire to her service, no black clothes as she wants this to be a fun, happy, and festive celebration of her life. Also, she wanted everyone to know she hated gladiolas. In lieu of flowers, the family requests memorial contributions be offered to Hephzibah Ministries, 6601 Zebulon Rd., Macon, GA 31220, and Global Partners, 13300 Olio Rd., Fishers, IN 46037, for missionaries Allan and Sheri Stevens. Arrangements have been entrusted to the care of Sproles Family Funeral Home, New Castle, Indiana. You may send the family a personal condolence at www.sprolesfamilycares.com. The Sproles family and staff are honored to serve the family of Ruby Estelle (Givens) Hudson.

The family of Ruby Estelle Givens Hudson created this Life Tributes page to make it easy to share your memories.