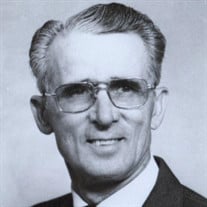 Rev. Russell L. Roberts, 89, formerly of New Castle, passed safely into the arms of Jesus early Monday morning at Harry Hynes Memorial Hospice Center in Wichita, Kansas. Rev. Roberts was loved and respected by family and friends. Russell was born on December 27, 1924, in Pulaski County, Kentucky, to the late Bradley and Angie (Nicholas) Roberts; the fifth of ten children. He was a Navy Veteran of World War II. On July 21, 1943, he married Emma Wilson, and to that union was born three children, Marjorie Ann, Gary Lee, and Theresa Lynn. Emma preceded him in death on November 13, 1989. He married Marjorie (Sue) Kiger Tamsett on April 14, 1990, and she also preceded him in death on December 8, 2009. Rev. Roberts began serving his Lord, on February 13, 1955, and answered the call to preach within a year. He was in full-time ministry as pastor, evangelist, and singer for 54 years. For 23 years he served as President of the John T. Hatfield Camp near Greenfield. He enjoyed playing the guitar and sang with the Greensboro Quartet for several years. Survivors include his children, Marjorie (Linville) Patterson of Ten Mile, TN; Gary (Cindy) Roberts of Kokomo and Theresa (Rob) Freeman of Wichita, KS; two step-daughters, Cinda Tamsett, of Muncie and Brenda Keihn of Richmond; 13 grandchildren & step-grandchildren; and 30 great-grandchildren and step-great-grandchildren; a twin brother and sister, Ray Roberts, of Galletin, TN, and Faye Jones, of Quinten, KY. In addition to his parents and his two wives, he was preceded in death by a step-daughter, Linda Rich; brothers and sisters, Arvey Roberts, Ava Dalton, Janis McVey, Shay Jean Freeman, Danny Joe Roberts and twins, Tarvon and Tavon Roberts. A celebration of Rev. Robert’s homegoing will be held at 11:00 a.m. Saturday, November 22, 2014 at Sproles Family Funeral Home with Rev. Stephen Kirkman officiating. Burial will follow in Glen Cove Cemetery with military honors conducted by contingents from the U.S. Navy and the American Legion and V.F.W. The family will receive friends from 4 – 8 p.m. Friday and one hour prior to the service Saturday at the funeral home. You may send the family a personal condolence at www.sprolesfamilycares.com. The Sproles family and staff are honored to serve the family of Rev. Russell Roberts.

The family of Rev. Russell L. Roberts created this Life Tributes page to make it easy to share your memories.

Send flowers to the Roberts family.