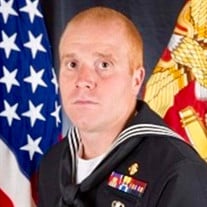 “Never above you. Never below you. Always beside you. Brothers forever.” HM1 (FMF/MCD/PJ) Ryan Michael Lohrey, a Special Amphibious Reconnaissance Corpsman, died Monday, July 10, 2017, along with his Marine Raider teammates in a plane crash in Mississippi. He was 30 years old. Ryan was born August 24, 1986, in Anderson, Indiana, the son of Michael and Teresa (Davis) Lohrey. Ryan was patient, even-tempered, humble, hard-working and had a winning smile. He was a 2005 graduate of Shenandoah High School where he played Tackle on offense and defense for the Raiders. He loved working out, food, the New England Patriots, and especially spending time with his wife and children, family, and friends. During high school, Ryan developed a deep desire to enter Special Operations, with a budding interest in trauma medicine as well. He entered basic training in 2007. After completing the grueling reconnaissance training pipeline, he deployed with 2d Reconnaissance Battalion, and later with 2d Raider Battalion. He was a veteran of Operation Enduring Freedom in Afghanistan and Operation Inherent Resolve in Iraq. His warfare qualifications include Enlisted Fleet Marine Force Warfare Specialist, Marine Combatant Diver, and Navy and Marine Corps Parachutist. In addition to receiving a Purple Heart for being wounded in battle, his dedication and sacrifices on the battlefield earned Ryan the Navy and Marine Corps Commendation Medal and a Combat Action Ribbon with gold star in place of a 2nd award. Those left to cherish Ryan’s memory include his loving wife, Cassie (Coaster) Lohrey of Hampstead, North Carolina, whom he married, on June 3, 2017; his two children, Gavin and Maelyn Lohrey; his parents, Michael and Teresa Lohrey of Middletown; grandparents, Barbara Lohrey of Middletown and George Lohrey of Sulphur Springs; aunts and uncles, Mark and Penny Lohrey, Dana Lohrey, and Rosemary and Dick Fredenburg all of Middletown, Andrea and David Foley of Fishers, Eric Lohrey of Middletown, Steve and Mary K. Davis of Denver, NC and Rhea and Joe Minnick of Pendleton; in-laws, Robert and Cheryl Coaster of Clio, MI; two sisters-in-law, Courtney (husband: Marcos) Lambaria of Hampstead, NC and Tiffany (husband: Scott) Wise of Clio, MI; nieces and nephews he loved spending time with, Kelsey, Katie and Avery Wise and Ivy and Austin Lambaria, as well as a friend who was like a brother, Greg (wife: Jacque) Norman of Jacksonville, North Carolina and many cousins and special friends. Ryan was preceded in death by his grandparents, Roy and Georgianna Davis. Funeral services will be held at 4:00 pm Monday, July 31, 2017, at the Middletown Church of the Nazarene, 698 N. 5th St. Middletown, Indiana, with Rev. Thomas L. Sproles, officiating. Military Funeral Honors will be conducted by contingents from the US Navy. Cremation will follow. The family will receive friends from 11:00 am until 3:00 pm. Monday, July 31, 2017, at the church. Arrangements have been entrusted to the care of Sproles Family Funeral Home in New Castle. In lieu of flowers, memorial contributions may be made payable to: Wish For Our Heroes, 4979 E. 216th St. Noblesville, IN 46062 or www.wishforourheroes.org. Envelopes will also be available at the church. All donations will go to support Ryan’s family. The family wishes to thank the Wish For Our Heroes organization for all of their support. You may send the family a personal condolence or share a memory at www.sprolesfamilycares.com. The Sproles family and staff are deeply honored to serve the family of HM1 Ryan Michael Lohrey, an American Hero. ***Sproles Family Funeral Home will be receiving HM1 Ryan Lohrey into our care on Thursday, July 27, 2017, at the Indianapolis International Airport. Those wishing to honor HM1 Ryan Lohrey upon his return home and support his family should be along the procession route listed below around 7 pm. Let's all come out as a community and give this American Hero the honor he deserves and the respect he earned. The procession route: Interstate 70 East to the Knightstown exit. We will go North on St. Rd. 109 into Anderson, turn right and go East on St. Rd. 236 into Middletown. Turn right on 8th St. Go down to Locust St. and turn left. Go down to 5th St. and turn right. Proceed down 5th/Raider Rd. to St. Rd. 36 and turn left. Go to St. Rd. 3 and go south to arrive at Sproles Family Funeral Home at 2400 S. Memorial Drive, New Castle.

&#8220;Never above you. Never below you. Always beside you. Brothers forever.&#8221; HM1 (FMF/MCD/PJ) Ryan Michael Lohrey, a Special Amphibious Reconnaissance Corpsman, died Monday, July 10, 2017, along with his Marine Raider teammates in a... View Obituary & Service Information

The family of Ryan Michael Lohrey created this Life Tributes page to make it easy to share your memories.

“Never above you. Never below you. Always beside you. Brothers...

Send flowers to the Lohrey family.