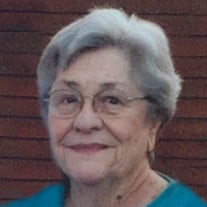 Sally Jo Harvey (Obear-Siemantel-Hunt), 79, of Fishers, died early on the morning of Saturday, March 10, 2018 at Allisonville Meadows in Fishers. She was born August 7, 1938 in Indianapolis, a daughter of the late Lester Leroy “Bud” and Kathryn (Gray) Harvey. Sally graduated from Arsenal Technical High School in Indianapolis in 1955. She worked in White Pages Management with Ameritech and retired following 30 plus years of employment. She was a member of the Ameritech Pioneers Club. Sally loved being at home, cooking, gardening, growing African violets, knitting, crocheting, and especially her Schnauzer dogs. Those left to cherish Sally’s memory include two sons, Paul (wife: Charll) Obear of Fishers and Trey Siemantel of Sonora, CA; two granddaughters, Emily and Valerie Obear of Fishers and a brother, Richard (wife: Sue) Harvey of Fishers. She was preceded in death by her husband, Walter Hunt, a son, James “Little Jimmy” Obear, and a sister, Nancy Anne Harvey. Private burial will take place in Memorial Park Cemetery. A service to celebrate Sally’s life will be held at a later date. In lieu of flowers, memorial contributions may be offered to the American Cancer Society at www.cancer.org. You may offer the family a personal condolence at www.sprolesfamilycares.com.

The family of Sally Jo Hunt created this Life Tributes page to make it easy to share your memories.

Send flowers to the Hunt family.