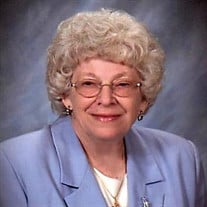 Sara Louise (Beal) Rifner, a life-long resident of New Castle, passed away peacefully on the evening of Sunday, June 23, 2019, surrounded by her family at Henry Community Health. She was just one month shy of her 96th birthday. Sara was born July 28, 1923 in New Castle, the only child of the late Otis and Lucille McKee (Berry) Beal. She was a member of the First United Methodist Church for over 70 years, a life member of Beta Sigma Phi Sorority where she was a recipient of the Queen Award in 1974 and received the Girl of the Year Award several times. She was a charter member of the Ladies of the Elks Auxiliary #484. Sara served on the board of Rainbow Girls and was a 75 year member of the Eastern Star Chapter #116, and also a charter member of the White Shrine of Jerusalem #17. She was a member of the Daughters of the American Revolution, The Sarah Winston Henry County Chapter. Sara was a charter member of the ABWA – New Beginnings and she was involved in both Boy Scouts and Girls Scouts receiving awards in both. Sara retired from Ameriana Savings Bank (First Merchants Bank) in 1988 having worked there for 15 years. She was preceded in death by her husband of 50 years, John Henry Rifner, who passed away on March 12, 1996; a granddaughter, Kimberly Ann Trainor; a son-in-law, Larry Gordon; a daughter-in-law, Patricia Kay Rifner; two sisters-in-law, Sister John Mary Rifner and Agnes Schortgen, and a brother-in-law, Robert Schortgen. Those left to cherish Sara’s memory include her children, Steve (Shirley) Rifner of Greenfield, Sheila Gordon of New Castle, Stewart Rifner of Cambridge City, Stanley Rifner of New Castle, and Susan (Jeff) Shelton of New Castle; grandchildren, Sandra (Josh) Sipes, Stacey (Thomas) Sobat, Samuel (Londa) Rifner, Erin McCartt, Shane Rifner, Sean Shelton, Boyd Gordon, Rhonda (Kenny) Addison, Jack (Tonya) Shank Jr., Dionne Shank, Michael (Chrissy) Shank, Amanda (Derek) Arnold, and Jennifer (Brannan) Stewart; great-grandchildren, Craig Rifner, Ethan Sipes, Blake and Macy McCartt, Lainey and Levi Rifner, Kherington, Jaxon, Haeven Shelton, Reid Rogers, Rane Addison, Christian, Mike, and Kennedy Shank, Jade Brown, Rayna Shank, Kenna and Cara Jo Arnold, and McKenna and Tyson Stewart; and a sister-in-law, Sister Martha Ann Rifner. Funeral services will be held at 11:00 am Wednesday, June 26, 2019 at First United Methodist Church with Pastor Tom McGilliard officiating. A memorial service will be offered by the Order of the Eastern Star Chapter #116 to begin the funeral. Burial will follow in South Mound Cemetery West Lawn Addition. Friends may call from 4 – 8 pm Tuesday at Sproles Family Funeral Home and one hour prior to the funeral at the church. Memorial contributions may be offered to the First United Methodist Church, 1324 Church St. New Castle, IN 47362. You may send the family a personal condolence at www.sprolesfamilycares.com. The Sproles family and staff is honored to serve the family of Sara Rifner.

Sara Louise (Beal) Rifner, a life-long resident of New Castle, passed away peacefully on the evening of Sunday, June 23, 2019, surrounded by her family at Henry Community Health. She was just one month shy of her 96th birthday. Sara was... View Obituary & Service Information

The family of Sara Louise Rifner created this Life Tributes page to make it easy to share your memories.

Send flowers to the Rifner family.