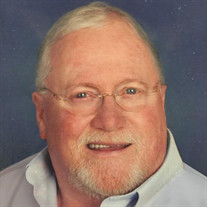 Mr. Stephen Lee Anderson, Muncie, went home to be with the Lord on the early evening of Friday, December 4, 2020 at IU Health Ball Memorial Hospital. He was 72. Steve was born March 18, 1948 in Muncie, Indiana, a son of the late Charles Gilbert and Esther Mae (Bousman) Anderson. Steve attended Gray High School in Redkey and not long after graduation began a 40 year career as a Special Accounts Supervisor in the baking industry. He retired in 2009 from the Holsum Bread Company after several years of service. Steve spent much of his leisure time fishing and hunting, particularly upland game birds. He also enjoyed traveling with his wife and took several trips to New Orleans, one of their favorite destinations. Steve kept a clear mind and you always knew where you stood with him. A very giving man, he had a great sense of humor and deeply loved his family and cherished the time he could spend with them. Steve was a member of the hunting club, Pheasants Forever, the NRA, as well as Old Town Hill Southern Baptist Church. He is survived by his wife of over 33 years, Cathy Lynn (Bell) Anderson; his children, Stephen Anderson, Jr., Brian Beaty, Dawn Burress and Wendy Bailey; several grandchildren and great-grandchildren; a special grandson, Dustin (Cassie) Slaven; his mother-in-law, Peggy Bell; his sister-in-law, Darlene Anderson; his brother-in-law, Mark (Tammy) Bell; nieces and nephew, Jeff (Felicia) Anderson; Ashley Bell (Peter Montgomery), Kyle (Courtney) Bell and Brock (Mackenzie) Bell; two great-nephews and a great-niece. In addition to his parents, he is preceded in passing by his brother, Charles ‘Gibby’ Anderson; a nephew, Dale Anderson and his father-in-law, Vernon Bell. Services will be conducted at 1:30 pm, Saturday, December 12, 2020 at Old Town Hill Southern Baptist Church, 3000 S. Burlington Dr, Muncie with Pastor Bruce Reynolds officiating. Burial will follow at Gardens of Memory. The family will receive friends from 11:30 am until the hour of service Saturday at the church. For those choosing to make a memorial contribution, the family has suggested those be offered to Old Town Hill Southern Baptist Church. Keeping in mind each one’s health during the Covid-19 situation, the wearing of face masks and social distancing will be strictly enforced. We also ask that hugging and shaking hands etc. be omitted so as we can ensure we can embrace each other again at a time in the not too distant future. Thank you so much for your understanding. The Sproles Family Funeral Home of New Castle is honored to serve the family of Mr. Stephen Anderson.

Mr. Stephen Lee Anderson, Muncie, went home to be with the Lord on the early evening of Friday, December 4, 2020 at IU Health Ball Memorial Hospital. He was 72. Steve was born March 18, 1948 in Muncie, Indiana, a son of the late Charles Gilbert... View Obituary & Service Information

The family of Stephen Lee Anderson created this Life Tributes page to make it easy to share your memories.

Mr. Stephen Lee Anderson, Muncie, went home to be with the Lord...

Send flowers to the Anderson family.