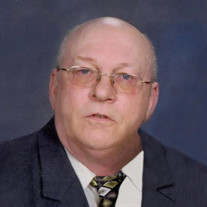 Stephen L. Applegate, 74, of Muncie went home to be with his Lord on the afternoon of Sunday, July 25, 2021, in his home following a lengthy illness. He was born on July 6, 1947, in Muncie, Indiana, a son of the late Martha (Sciscoe) Rainey and Charles Applegate. Steve served eight years in the US Army including one year in Vietnam. He was a 20-year member of the Pilgrim Nazarene Church in Muncie. He married the love of his life, Jane Maitlen, on July 16, 1967. He worked as a Correctional Officer at the Pendleton Correctional Industrial Facility. He loved NASCAR, until Mark Martin retired, and was a Chicago Bears Fan. During his time of illness, he enjoyed racing games on his phone and coloring. Those left to cherish Steve’s memory include his wife of 54 years, Jane Applegate; two sons, Stephen R. (Shawna) Applegate and Jacque A. (Mary) Applegate both of Muncie; four grandsons, Jacque Applegate II, Bryant Applegate, Stephen Applegate Jr. and Matthew Black; six granddaughters, Jessyca (C.J.) Angel, Samantha Applegate, Mayrissa Applegate, Spring Applegate, Brittani Carr and Tequila Carr; a great-grandson, Jackson Applegate; three great-granddaughters, Evelynn Applegate, Rachael Angel, and Adeline Applegate; a brother, Charles “Tom” (Louise) Applegate of Warren, IN; three sisters-in-law, Sandra (Stanley) Moore of Muncie, Jackie (Myron) Nixon of Muncie, and Kathie (Dan) Fountain of Middletown; a niece, Brenda Applegate, and a nephew, Charles T. Applegate, Jr. Steve was preceded in death by his mother, Martha (Clarence) Rainey; his father, Charles (Mary) Applegate and by a great-granddaughter, Chelsey Holt-Applegate. Funeral services will be held at 1:00 pm Thursday, July 29, 2021, at the Pilgrim Nazarene Church, 811 E. 26th Street, Muncie, Indiana, with Pastor Scott Turner officiating. Burial will follow in Gardens of Memory Cemetery where military honors will be conducted by contingents from the US Army and the Daleville American Legion Honor Guard. Friends may call from 11:00 am until the time of service, Thursday, at the church. Arrangements have been entrusted to the care of Sproles Family Funeral Home in New Castle. You may offer the family a personal condolence at www.sprolesfamilycares.com.

Stephen L. Applegate, 74, of Muncie went home to be with his Lord on the afternoon of Sunday, July 25, 2021, in his home following a lengthy illness. He was born on July 6, 1947, in Muncie, Indiana, a son of the late Martha (Sciscoe) Rainey... View Obituary & Service Information

The family of Stephen L. Applegate created this Life Tributes page to make it easy to share your memories.

Send flowers to the Applegate family.