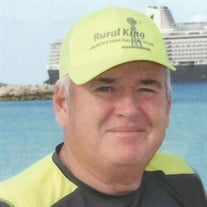 On Monday, March 30, 2020, Tad Alan McBride, loving husband, father and grandfather, passed away unexpectedly of an apparent heart attack at age 60. Tad was born on Sept. 22, 1959, in Marlette, Michigan, to Dennis and Pauline McBride. He graduated from Tri Jr. - Sr. High School in 1977. He worked for his family’s commercial construction business, McBride Corporation, based in Lewisville, Ind., eventually becoming CEO. He also founded several companies, including Tad McBride Sauces, his line of artisanal sauces. On Nov. 4, 1979, he married Connie Chew; they recently celebrated their 40th anniversary. They raised two children, Aimee and Daniel. For years, Tad served as a high-school Sunday School teacher and board member at South Memorial Drive Church of God in New Castle. In 2006, they moved to North Carolina to operate Locust Springs Christian Retreat Center, but they returned to Indiana in 2018. A devout, generous and hardworking man, Tad offered his time and talents to many friends, family and community members—taking photos, cooking meals or digging ditches, often for no charge. He was also known for helping people stranded with flat tires. Tad delighted in cooking elaborate breakfasts, including his famous waffles and omelets. He loved to take long walks outdoors and play with his grandchildren. Tad was known for his deep kindness, warm hugs, lovable smile, encouragement and the ability to see the good in everyone he met. He was preceded in death by his father, Dennis, brother Terry and daughter Naomi. He is survived by his wife Connie; daughter Aimee (husband Jeff) Morgan; grandchildren Dominic and Elena; son Daniel (wife Beth); grandchildren Samuel and Jane; mother Pauline; sister Kim Blair; brother Arlen (wife Susan); mother- and father-in-law Ivan and Janet Chew, as well as many cousins, nieces and nephews. A graveside service will be held privately, however the family will host a public memorial service at a later date. In lieu of flowers, the Tad McBride Memorial Fund has been established. Donations can be made donate here or by calling 765-521-2400 or mailing a check to Sproles Family Funeral Home in care of the Tad McBride Memorial Fund to 2400 S. Memorial Dr., New Castle, IN 47362, or via gofundme.com/tad-mcbride-memorial-fund. Donations will cover funeral costs and other expenses. The Sproles family and staff are honored to serve the family of Tad Alan McBride.

On Monday, March 30, 2020, Tad Alan McBride, loving husband, father and grandfather, passed away unexpectedly of an apparent heart attack at age 60. Tad was born on Sept. 22, 1959, in Marlette, Michigan, to Dennis and Pauline McBride. He graduated... View Obituary & Service Information

The Sproles family has created this page for you to share your memories.

Send flowers to the McBride family.