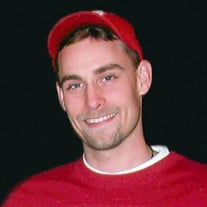 Terry T. “T-Bone” Collins, 39, of Muncie, passed away Monday, April 4, 2016, at IU Health Ball Memorial Hospital following a brief illness. He was born September 17, 1976 in Muncie, a son of the late Terry E. and Sandy (Delk) Collins. Terry was a 1995 graduate of Muncie Central High School. He earned an Associate’s Degree in Criminal Justice from Ball State University. For many years Terry owned and operated Collins Construction Company and just recently had begun working at Progress Rail in Muncie. Terry loved basketball, especially Michael Jordan and the Chicago Bulls, and riding BMX bikes, canoeing and fishing with his children. Family was everything to Terry and he lived for spending time with his children. He had a giving heart and was a wonderful father, son and brother. In addition to his mom and step-father, Sandy and Kevin Carender of Muncie, he is survived by four children, Dylan Hines, Raquel Collins, Trey Collins and Averie Collins all of Muncie; two sisters, Melissa (husband: John) Kiger of Blountsville and Whitney Keeton of Pinellas Park, FL; a brother, Joshua Collins of Georgia; nieces and nephews, Bailey, Gavin and Grace Stackhouse, Jackson Kiger, Taya, Bella, Layla, Madison and Chyenne Collins; and many aunts, uncles and cousins. Terry was preceded in death by his father Terry E. Collins in 2008; his grandparents, Ruth Byrns, Noble Delk and Robert and Ada Belle Collins; five uncles, Larry, Gene and Johnnie Delk and Jim and Jack Collins and three aunts, Shirley Roderick, Linda Geise, and Annie Swafford. Funeral services will be held at 11:00 a.m. Friday, April 8, 2016 at True Light Baptist Church with Pastors Mark Heskett and Dennis Trimble officiating. Burial will follow at Elm Ridge Cemetery. The family will receive friends from 4 – 8 p.m. Thursday at the church. Arrangements have been entrusted to the care of Sproles Family Funeral Home in New Castle. Memorial contributions may be made to the funeral home to assist the family with expenses. You may send the family a personal condolence at www.sprolesfamilycares.com. The Sproles family and staff are honored to serve the family of Terry Collins.

The family of Terry "T-Bone" Collins created this Life Tributes page to make it easy to share your memories.

Send flowers to the Collins family.