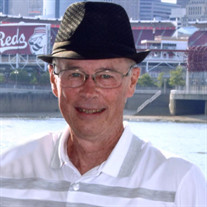 Terry J. Fellers, 64, of New Castle passed away peacefully on Wednesday, September 30, 2020. He was born on February 10, 1956 in New Castle, a son of Marland and Marilyn (Bales) Fellers. Terry attended Blue River Schools and enjoyed playing trumpet in band. He graduated high school in 1974. He furthered his education at ITT Tech in heating, cooling and refrigeration. He currently worked for Advantage Engineering of Greenwood for 41 years before battling cancer. Terry was well known for his Mr. Fix-it skills. He had knowledge about all things mechanical and could repair anything. He learned this from his grandpa, Brodie Fellers. Terry was also working to renew his pilot license so he could fly planes again. He was a big Nascar racing fan and a competitive Go-Kart racer with his sons. A big highlight of the year was taking his Harley Davidson to Biketoberfest at Daytona Beach, Florida during the month of October. Terry was a hardworking Christian man, devoted to his family and always willing to help others before himself. Those left to cherish his memory include his fiancé, Vickie McCreary; sons, Cory (wife: Lindsay) Fellers, Kevin (wife: Shelly) Fellers, Caleb (wife: Jordan) Fellers and Casey Fellers; mother of his children, Debbie Fellers; grandchildren, Elijah, Leila and Rylee; his mother, Marilyn Fellers; siblings, Marla (husband: Roger) Huxhold, Chris (wife: Teresa) Fellers, Brad (wife: Lisa) Fellers and numerous nieces, nephews and cousins. Terry was preceded in death by his father, Marland Fellers. Funeral services will be held at 4:00 pm, Sunday, October 4, 2020 at Sproles Family Funeral Home with Ben French officiating. Friends may call from 2 – 4 pm prior to the service at the funeral home. You may send the family a personal condolence at www.sprolesfamilycares.com. The Sproles family and staff are honored to serve the family of Terry Fellers.

The family of Terry J. Fellers created this Life Tributes page to make it easy to share your memories.

Terry J. Fellers, 64, of New Castle passed away peacefully on...

Send flowers to the Fellers family.