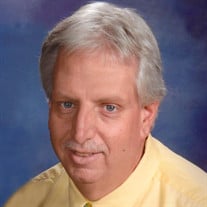 Timothy O. McCreary, age 50, of New Castle, passed away unexpectedly on the morning of Saturday, January 16, 2016 in his home following a brief illness. He was born on May 11, 1965 in Indianapolis, a son of the late Jack and Carol (Vise) McCreary. Tim was a 1983 graduate of George Washington High School in Indianapolis. He attended DeVry University. Tim joined the US Navy in 1984 and served during The Gulf War where he operated the electrical shop on the USS Mississippi, a nuclear powered guided missile cruiser. Following Tim’s service in the Navy, he worked as a private electrical engineering contractor in power plants across the world. Tim was a member of Mt. Summit Christian Church where he served in various leadership capacities. He enjoyed gardening, yard work, tractor shows, camping and most of all spending time with his grandchildren. Those left to cherish Tim’s memory include his wife of 20 years, Vickie (Houser) McCreary, whom he married at 12:31 a.m. January 1, 1996; two daughters, Ginger (husband: Quick) Martinez of Anderson and Jennifer McCreary of Greenfield; two step-children, Danny (wife: Brittany) Stokes of Plano, TX and Lindsay Stokes of Greensburg; two granddaughters, Clarissa and Kaydence; two grandsons, Eros and Brayden; brother, Randy (wife: Tina) McCreary of Indianapolis, three sisters, Lisa Workman of Indianapolis, Kathy (husband: Charlie) Rosebrock of Carmel, and Jackie (husband: Michael) Mendham of Hampton, VA; his mother-in-law, Betty Houser of New Castle, sister-in-law, Debbie (husband: Gary) Masters of Losantville, two brothers-in-law, Chris (wife: Paula) Houser of Muncie and Steven (wife: Debbie) Houser of Springport and several aunts, uncles, nieces and nephews. In addition to his parents, he was preceded by his father-in-law, Phillip Houser, in 2008. Funeral services will be held at 11:00 a.m. Thursday, January 21, 2016 at Sproles Family Funeral Home with Rev. Lee Yates and Rev. Mark O’Brien officiating. Military honors will be provided by contingents from the US Navy, American Legion and VFW. Burial will follow in Mooreland Cemetery. The family will receive friends from 4 - 8 p.m. Wednesday at the funeral home. Memorial contributions may be made to the American Heart Association. You may send the family a personal condolence at www.sprolesfamilycares.com. The Sproles family and staff are honored to serve the family of Timothy McCreary.

Timothy O. McCreary, age 50, of New Castle, passed away unexpectedly on the morning of Saturday, January 16, 2016 in his home following a brief illness. He was born on May 11, 1965 in Indianapolis, a son of the late Jack and Carol (Vise) McCreary.... View Obituary & Service Information

The family of Timothy O. McCreary created this Life Tributes page to make it easy to share your memories.

Send flowers to the McCreary family.