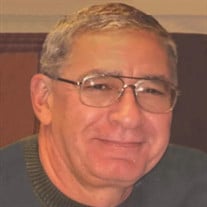 Timothy W. “Tim” Shaw, 74, of New Castle, passed away unexpectedly early Sunday morning, September 19, 2021 at Westwood Golf Club where he worked with the grounds crew. He was born on December 9, 1946 in Henry County, Indiana, a son of the late James Thomas and Virgie (Hughes) Shaw. Tim was a 1965 graduate of New Castle Chrysler High School and married the love of his life, Barbara Owens, on June 8, 1968. Tim served in the US Navy, Petty Officer Second Class, aboard the USS Galveston CLG3. He retired after 35 years of service from Chrysler Corporation in 2000 and immediately began a part-time job with the grounds crew at Westwood Golf Club. Tim loved to golf and greatly enjoyed spending weekends with his family boating on the river he affectionately called the “Ohio Ocean.” Tim was a kind-hearted person with a great sense of humor. He loved people and never met a stranger. He was a long-time member of the Greensboro Lodge #175 F.& A.M. and was past president of the Henry County Shrine Club. He was also a member of the Eagles, the Elks, and a lifetime member of the American Legion and V.F.W. where he was a proud member of the Funeral Honor Guard. Those left to cherish Tim’s memory include his wife of 52 years, Barbara Shaw; his daughter, Corissa Shaw Smith of Jeffersonville; a son, Jamie (Nicole) Shaw of New Castle; two grandsons, David Brian Smith Jr., and Connor L. Smith; two granddaughters, Olivia Ryan Shaw and Carly James Shaw; two step-grandchildren, Madison and Kyndall; three sisters, Flo Clampitt and Dorothy Brewer, both of Venice, Fl, and Betty Griffey of New Castle, a sister-in-law, Marsha (Les) Whatling of Bury St. Edmunds England, three brothers-in-law, David Owens of Albany, KY, Bill Owens of The Villages, FL, and Ronnie Owens of New Castle, and several nieces and nephews. In addition to his parents, Tim was preceded in death by his brother, James Shaw Jr., and a sister, Mary Andis. Visitation will be held on Saturday, September 25, 2021 from 2 - 6 pm at Sproles Family Funeral Home with a Masonic Memorial Service at 2:00 pm. Funeral services will be held Sunday, at 2:00 pm at the funeral home with Pastor Jerry Ingalls officiating with Military Funeral Honors. Cremation will follow with burial at a later date in South Mound Cemetery. You may watch the service via live stream by Clicking Here Cremation will follow with burial at a later date in South Mound Cemetery. Memorial contributions may be offered to the Shriners Hospital for Children. You may donate online by Clicking Here or envelopes will be available at the funeral home. You may send the family a personal condolence at www.sprolesfamilycares.com. The Sproles family and staff are honored to serve the family of Timothy W. Shaw.

The family of Timothy Wayne Shaw created this Life Tributes page to make it easy to share your memories.

Send flowers to the Shaw family.