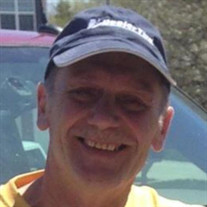 Timothy A. Toney, 63, of New Castle, passed away on Friday, October 2, 2020 in Indianapolis following a brief illness. He was born August 12, 1957, in Richmond, Indiana, a son of the late Carey Toney and Beverly Lewis. Tim grew up in Centerville and was a 1976 graduate of Centerville High School. He entered the US Army, July 6, 1976 and served for 10 years as a mechanic in the motor pools. Following his separation from the Army, Tim worked for the Indiana Department of Corrections as a Recreation Leader at the Pendleton Reformatory. He also worked as a mechanic for Gaddis Chrysler in Muncie and Goodwin Bro’s Automotive in New Castle. Tim worked hard and played hard. He always placed responsibilities first but, when responsibilities were accomplished, he loved to party. He enjoyed working on vehicles, scrapping, and especially driving around visiting with people. As a teenager Tim excelled in wrestling and track and field. He enjoyed watching NASCAR and football. Those left to cherish Tim’s memory include two daughters, Stephanie Toney (Bradley Ford) of Waverly and Melanie (Darnell) Toney-Gray of Indianapolis; a step-daughter, Amanda Pierce-Eaks of New Castle; grandchildren, Davin and Danyelle Gray, and Lily and Logan Goings; brothers and sisters, Claudia Hindriksen of Prescott, AZ, Ed Toney of Rushville, Mike Toney of Centerville, Teri Orr of Centerville, Millie Page of Anderson, Michelle Fields, and George Lewis of Hagerstown, and several nieces, nephews, and cousins. In addition to his parents, Tim was preceded in death by a brother, Fremont Toney. Friends may call from 1:00 pm until 3:00 pm Wednesday, October 7, 2020 at Sproles Family Funeral Home with Military Honors conducted at 3:00 pm by contingents from the US Army, American Legion and V.F.W. You may offer the family a personal condolence at www.sprolesfamilycares.com. The Sproles family and staff are honored to serve the family of Timothy Toney.

Timothy A. Toney, 63, of New Castle, passed away on Friday, October 2, 2020 in Indianapolis following a brief illness. He was born August 12, 1957, in Richmond, Indiana, a son of the late Carey Toney and Beverly Lewis. Tim grew up in Centerville... View Obituary & Service Information

The family of Timothy Allen Toney created this Life Tributes page to make it easy to share your memories.

Timothy A. Toney, 63, of New Castle, passed away on Friday, October...

Send flowers to the Toney family.