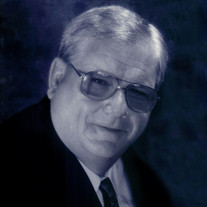 James Thomas “Tom” Bouslog Jr., 71, of New Castle, passed away on the morning of Friday, November 13, 2015 at The Waters of New Castle following a brief illness. He was born on June 16, 1944 in New Castle, a son of the late James Thomas Bouslog Sr. and Irene Kay (Knollman) Bouslog. Tom was known for his outgoing personality and friendliness. He never met a stranger. Tom was a 1962 graduate of Walter P. Chrysler High School and during high school worked at Kroger’s. He served in the U.S. Army and was stationed in Germany where he enjoyed being a driver for the Colonel. Tom worked for Chrysler Corporation in New Castle retiring in 2001 after 35 years of service. He was a member of U.A.W. Local # 371 and the American Legion Post #137. Tom was an avid supporter of all New Castle High School sports and an avid Notre Dame fan but most of all enjoyed being with his family and friends. Those left to cherish Tom’s memory are his wife, Pat (Mobley) Bouslog, whom he married on July 16, 1993; daughters, Veronica “Ronni” (husband: Gary) Brandenburg of Prairie Creek and Julie (husband: John) Mueller of Kansas City, MO; a son, Brian Bouslog of New Castle; six grandchildren, Brant, Helen, David, Alan, Ann and Kyle; a brother, Joe (wife: Karen) Bouslog of Trabuco Canyon, CA, and several nieces and nephews. In addition to his parents, he was preceded by his two sisters, Beverly Charles and Ann Bond. Funeral services will be held at 11:00 a.m. Tuesday, November 17, 2015 at Sproles Family Funeral Home with Deacon Russ Woodard officiating. Burial will follow in St. Anne Cemetery with military honors provided by contingents from Ft. Knox and the American Legion and V.F.W. The family will receive friends from 4 – 8 p.m. Monday at the funeral home. Memorial contributions may be offered to the New Castle Athletic Department, 801 Parkview Drive, New Castle, IN 47362. You may send the family a personal condolence at www.sprolesfamilycares.com. The Sproles family and staff are honored to serve the family of James Thomas “Tom” Bouslog.

The family of Tom Bouslog created this Life Tributes page to make it easy to share your memories.

Send flowers to the Bouslog family.