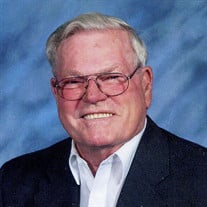 U.G. “Gene” Neal, 88, of New Castle, passed away surrounded by his family on the afternoon of Thursday, April 6, 2017 at St. Vincent Heart Hospital in Indianapolis. He was born on July 29, 1928 in Bug, KY a son of the late Willie and Mattie Neal. Gene grew up traveling between New Castle and Byrdstown, TN before settling down in Indiana where he met his wife, Mable Shelton. They were married on December 31, 1948. Gene was a carpenter at heart and crafted beautiful furniture from recycled lumber for his children and grandchildren. He retired from New Castle Chrysler as a steam engineer after 32 years of service. Gene was a Nascar fan and enjoyed watching his great-grandchildren in school sports and bowling. He was member of the Four Square Gospel Church where he was involved in the Faith class and several projects as needed. Gene had breakfast nearly every morning with great friend Jim Miller and their waitress, Carol Simerly. He was also visited by people from the church, especially Don Alley and Carlos Lowe who gave encouragement and prayers. Those left to cherish his memory include, his children, Linda (husband: Bob) Banta and Rick (wife: Debbie) Neal; grandchildren, Travis (wife: Amy) Banta, Jaime (husband: Jimmy) Miller and Chad (wife: Meghan) Neal; great-grandchildren, Maddie, Nathan and Ceci Banta, Brooklyn and Hannah (fiancé: Brandon Kindler) Miller, Isaiah, Caleb, Eli and Korah Neal; great-great granddaughter, Emery Grace Kindler; sister, Gaye Matthews and numerous nieces and nephews. In addition to his parents, he was preceded in death by his loving wife, Mable Neal (2003) and siblings, Jessie Neal, Dude Neal and Neta Smith. Memorial contributions may be offered to the National Fabry Disease Foundation for research. Funeral services will be held at 2:00 pm, Tuesday, April 11, 2017 at Sproles Family Funeral Home with Pastor Jim Becker and Rev. Charles McDonald. Burial will follow at South Mound Cemetery. Friends may call from 11:00 am until the time of service at the funeral home. You may leave the family a personal condolence at www.sprolesfamilycares.com The Sproles family and staff are honored to serve the family of U.G. Neal.

The family of U.G. "Gene" Neal created this Life Tributes page to make it easy to share your memories.

Send flowers to the Neal family.