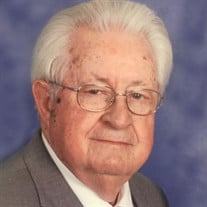 Vernon Bell, of Muncie, went Home to be with the Lord on the morning of Thursday, June 27, 2019. He was 85. Vernon was born May 12, 1934 in the Rocky Branch community near Monticello, Kentucky, a son of the late Marion Bell and Nancy Jane (Ross) Phipps. Vernon was a 1952 graduate of McCreary County High School in Whitley City, Kentucky and shortly thereafter the family moved to Muncie. He was a proud veteran and proudly served his country in the United States Army during the Korean Conflict. Vernon was employed for many years as a supervisor at Borg Warner, retiring in 1993. He enjoyed golf, fishing, singing as well as spending winters with his wife in Florida. He dearly loved his family and was very proud of them and their accomplishments. Vernon’s life was centered around his church, Old Town Hill Southern Baptist Church. He was a member and was faithful there for over 67 years. He served in many capacities including that of a Deacon for 43 years, Music Director for 30 years, Church Treasurer for 20 years, a member of the building committee as well as teaching Sunday School for several years. He was also instrumental in the planning and construction of the new church building on Burlington Drive. Vernon is survived by his loving wife of 62 years, Peggy (Sexton) Bell; his children and their spouses, Cathy Lynn (Steve) Anderson and Mark (Tammy) Bell; his grandchildren, Ashley Bell (fiancé: Peter Montgomery), Kyle (Courtney) Bell and Brock (Mackenzie) Bell; his great-grandchildren, Kohen, Deacon and Maclaren Bell; his sisters, Lois Sewell, Juanita Brown and Anna Ruth Young; his brothers, Doyle (Lavonne) Bell and Andrew (Shirlean) Phipps as well as several nieces, nephews and cousins. In addition to his parents, he is preceded in passing by his stepfather, Rev. H.E. Phipps, his sisters, Beulah Edwards, Sylvia Winchester, Velma Gregory, Clona Black and Kay Crisp and a brother, Arnold Bell and several stepbrothers, stepsisters, brothers-in-law, sisters-in-law and cousins. Funeral services will be conducted at 12 noon, Monday, July 1, 2019 at the Old Town Hill Southern Baptist Church, 3000 S. Burlington Dr. Muncie, IN with his nephews, Rev. Mark Sewell and Rev. Andy Phipps, Jr. and Pastor Bruce Reynolds officiating. Burial will follow at Tomlinson Cemetery. The family will receive friends from 3pm until 7pm, Sunday, June 30, 2019 at the church. The family would like to extend their heartfelt gratitude and appreciation to the staff at Morrison Woods for their loving care during Vernon’s stay. For those choosing to make a memorial contribution, the family has suggested they be offered to the Building Fund at Old Town Hill Southern Baptist Church. You may send the family a personal condolence at www.sprolesfamilycares.com. The Sproles family and staff is honored to serve the family of Mr. Vernon Bell.

Vernon Bell, of Muncie, went Home to be with the Lord on the morning of Thursday, June 27, 2019. He was 85. Vernon was born May 12, 1934 in the Rocky Branch community near Monticello, Kentucky, a son of the late Marion Bell and Nancy Jane (Ross)... View Obituary & Service Information

The family of Vernon Bell created this Life Tributes page to make it easy to share your memories.

Vernon Bell, of Muncie, went Home to be with the Lord on the...

Send flowers to the Bell family.