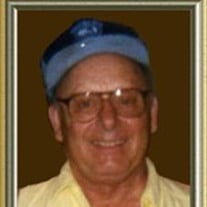 Vernon Wools, 83, of New Castle, died Thursday, July 24, 2008 in his residence following declining health over the past two years. He was born October 25, 1924 in Linton, Indiana, a son of the late Freeman and Anna (Norris) Wools. Vernon was a 1942 graduate of Anderson High School. He served during WWII in the U.S. Army Air Corps of Engineers installing runway for aircraft. He retired from Chevrolet Truck and Bus in Indianapolis as a Pattern Maker following 38 years of employment. He was a member of the VFW and the Masonic Lodge F. & A.M. of Carmel where he served as a Past Master and a 50 year member. He was a woodworker and enjoyed remodeling his homes and building furniture. He is survived by his wife, Ina Pauline (Blackburn) Wools; two children, Stephen (wife: Penny) Wools of Ft. Lauderdale, FL and Deborah (husband: Eric) Cox of Carmel; three step-children, Duane (wife: Holly) Cory of Littleton, CO, Bruce Cory of Terre Haute, and Alice Chamblin of Westfield; 18 grandchildren; 17 great-grandchildren; a brother, Archie Wools of Anderson and several nieces and nephews. He was preceded in death by five brothers, Earl, Lloyd, Willard, Clarence and Gilbert Wools and one sister, Esther Etchison. The funeral service will be held at 11:00 a.m. Monday, July 28, 2008 at Sproles Family Funeral Home with Rev. Duane E. Cory officiating. Military honors will be provided by the VFW and the American Legion. Burial will follow in South Mound Cemetery West Lawn Addition. Friends may call from 3 – 5 p.m. Sunday, July 27, 2008 at the funeral home. Memorial Contributions may be made to the Salvation Army with envelopes available at the funeral home. You may send the family a personal condolence at www.sprolesfamilycares.com.

Vernon Wools, 83, of New Castle, died Thursday, July 24, 2008 in his residence following declining health over the past two years. He was born October 25, 1924 in Linton, Indiana, a son of the late Freeman and Anna (Norris) Wools. Vernon... View Obituary & Service Information

The family of Vernon Wools created this Life Tributes page to make it easy to share your memories.

Send flowers to the Wools family.