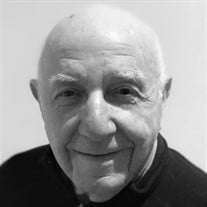 Vito Altavilla, 83, of Cincinnati, Ohio, passed away early on Wednesday, June 8, 2022, at Ascension St. Vincent Heart Center in Carmel, Indiana. He was born February 24, 1939, in Brooklyn, New York, a son of the late Cruce “Albert” and Antoinette (Bartolomeo) Altavilla. Vito joined the US Navy at age 17 and was stationed in Morocco in North Africa. He entered university at Rochester Institute of Technology where he earned a bachelor of arts degree after his naval service. While at RIT he met his future wife, Ingrid Brigitte Hahnel. They moved to Montreal, Canada in 1963 so Vito could pursue a career in advertising and sales. He later became an Industrial Chemist where he developed innovative water-based paint formulations, industrial cleaners, and a method for extracting oil from tar sands. Vito holds over two dozen patents. He and Ingrid raised two sons in Montreal and following 25 plus years there retired to Cincinnati, Ohio. He was lucky enough to build a cottage with his family on an island with no power in Lac Simon, Quebec, and spent many summers enjoying time there. Vito enjoyed golfing and at age 71 was thrilled to hit a hole in one. Later in life, Vito became a writer and penned a biographical narrative titled, It Began in Brooklyn, which was being turned into a screenplay at the time of his passing. In addition to his wife of 61 years, Ingrid Altavilla, Vito is survived by two sons, Keith and Kurt Altavilla; three grandsons he was incredibly proud of, Jake, Dex, and Aidan Altavilla. He is also survived by his younger brother, Bob Altavilla, and cousins, Grace Miedzwiecki, Joseph Bartolomeo, and Victor Altavilla. Per Vito's wishes, there will be no public services. In lieu of flowers, please make a donation to your favorite Christian charity in memory of Vito. You may offer the family a personal condolence at www.sprolesfamilycares.com. The Sproles family and staff are honored to serve the family of Vito Altavilla.

The family of Vito Altavilla created this Life Tributes page to make it easy to share your memories.

Vito Altavilla, 83, of Cincinnati, Ohio, passed away early on...

Send flowers to the Altavilla family.