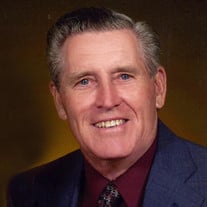 In loving memory of William W. “Bill” Furrow, faithful husband, loving father, and devoted grandfather, left this earth peacefully to be with his Savior and Lord on the 26th of June, 2021. Bill was born on January 16, 1929 in Gary, WV, a son of the late Jesse L. and Stella (Wiggins) Furrow. He married the love of his life, Doris Jarrett on August 28, 1946 in Pikeville, KY. Bill, also known as Toby, lived a long fruitful life of 92 years, based upon his faith in the Lord and Savior of which he strongly believed. He has been a resident of West Virginia, Utah and Indiana. Bill retired in 1973 from U.S. Steel in West Virginia and later moved to Indiana. He worked in maintenance for New Castle Community Schools before retiring in 1993. He also worked on many building projects in his lifetime such as churches and homes. Bill and Doris faithfully attended Cross Road Church. His family and friends will miss him dearly and forever hold him close in their hearts. Those left to cherish his memory include his loving wife of 75 years, Doris Furrow; three daughters, Nina (husband: Facundo) Cortez, Donna (husband: Michael) Weller and Patricia (husband: John) Tyner; a son, W. Lynn (wife: Karmen) Furrow; 15 grandchildren and 26 great-grandchildren and two great-great-grandchildren; three brothers, Clifton (wife: Shirley) Furrow, Malcom (wife: Dottie) Furrow and Paul Furrow and a sister, Velma (husband: Bob) Gilliam. In addition to his parents, he was preceded in death by a daughter, Carolyn S. Patton; six siblings, Agnes Huff, Ray Furrow, Junior Furrow, Margie Hawks, Dorothy Sparks and Ruth Atkinson. Visitation will be held from 3 – 6 pm, Friday, July 2, 2021 at Sproles Family Funeral Home in New Castle. Funeral services will be held at 2:00 pm, Saturday, July 3, 2021 at Sproles Family Funeral Home with Pastor Danny Douglas officiating. Burial will follow at Green Hills Memory Gardens in New Castle. You may send the family a personal condolence at www.sprolesfamilycares.com. The Sproles family and staff are honored to serve the family of William W. Furrow.

In loving memory of William W. &#8220;Bill&#8221; Furrow, faithful husband, loving father, and devoted grandfather, left this earth peacefully to be with his Savior and Lord on the 26th of June, 2021. Bill was born on January 16, 1929 in Gary,... View Obituary & Service Information

Livestream of the funeral service will begin at 1:50 pm prior to the service on the Tribute Wall.

Send flowers to the Furrow family.