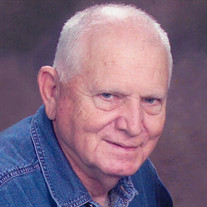 William W. “Toby” Reynolds, 78, of Pall Mall, TN, passed away on the afternoon of Sunday, September 3, 2017 surrounded by his loving family at Albany Health and Rehabilitation in Albany, IN. He was born on April 28, 1939 in Pall Mall, TN, a son of the late Oplis and Gladys (Delk) Reynolds. On March 21, 1959 Toby married the love of his life, Effie A. Davis. They moved to Muncie in June, 1959 and he began working at General Motors. He retired following 30 years of service. He was a member of the Avondale Sympathy Club and UAW 499. In 2005, he moved back to Pall Mall, TN where he resided until his recent health decline required rehabilitation. His favorite things to do were watching NASCAR, setting on his front porch drinking coffee and watching the wildlife with the love of his life, Effie, and their faithful dog, Prince. He attended the York Chapel in Pall Mall, TN. Those left to cherish Toby’s memory include his wife of 58 years, Effie (Davis) Reynolds; two sons, Tim (Patti) Reynolds of Daleville and Tom (Sheila) Reynolds of Selma; a daughter-in-law, Chris Reynolds of Selma; a sister-in-law, Jean Stewart; four grandchildren, Elizabeth (Jason) Keeley, Ross (Marie) Reynolds, Breanna Reynolds and Travis Reynolds and six great-grandchildren, Kelly, Holly, Chelsie, Bradley, Arianna and Kingston. He was preceded in death by his parents; a son, Bob Reynolds; a daughter-in-law, Pam Reynolds; a brother, Charles Reynolds and three sisters, Annie Stephens, Morlene Brannon and Lucille Reynolds. Friends may call from 4 - 8 pm Wednesday, September 6, 2017 at Fellowship Baptist Church, 2204 South Macedonia Ave. Muncie, IN. Friends may also call from 4 - 8 pm Friday, September 8, 2017 at Jennings Funeral Homes in Jamestown, TN. Funeral services will be held at 11:00 am Saturday, September 9, 2017 at York Chapel, Pall Mall, TN with Pastor Mike Allen officiating. Burial will follow in Frogge Chapel Cemetery. Arrangements have been entrusted to the care of Sproles Family Funeral Home in New Castle. You may send the family a personal condolence at www.sprolesfamilycares.com. The Sproles family and staff are honored to serve the family of William “Toby” Reynolds.

The family of William "Toby" Reynolds created this Life Tributes page to make it easy to share your memories.

Send flowers to the Reynolds family.